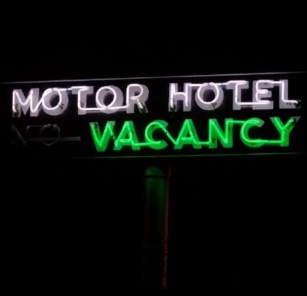 September 3, 2019 (El Cajon) -- When you arrive at your home-away-from-home lodging for a business trip or a family vacation, the last thing you want to worry about is drunken brawls, prostitution, drug activity, bed bugs, and dirty room conditions affecting your stay. You have a certain expectation that the property’s owners and managers are abiding by a certain set of standards.

Unfortunately, those standards may vary from location to location. Additionally, certain lodging property owners and managers may be unwilling or feel unable to exclude or evict guests because of certain behavior.

The El Cajon City Council recently passed a new law aimed at making sure hotel and motel guests have safe and clean lodging by minimizing nuisance or criminal activity. It’s a first for any municipality in San Diego County. 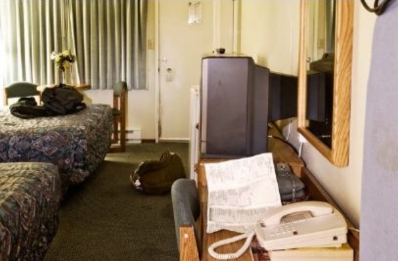 Officially, it’s referred to as a Deemed Approved Lodging Establishment Ordinance. The purpose of the ordinance is to establish a level playing field for all motel and hotel properties with a common set of minimum expectations for property maintenance, security and management.

The passage of the alcohol sales Deemed Approved Ordinance saw significant changes in the operations of alcohol retailers in the city and resulted in a reduction in drinking in public, public drunkenness and minors in possession arrests. El Cajon is looking to repeat their success with the adoption of this new ordinance.

The Lodging Establishment Ordinance provides a mechanism to deal with problem properties with ongoing issues that the property owner and manager are unwilling to address. El Cajon has 1,000 motel rooms and 260 hotel rooms that are either open for business or under construction. Most of them are concentrated along Main Street, El Cajon Boulevard, Magnolia Avenue and Interstate 8.

The council recognized a growing and established pattern of problems in recent years and took steps to address them by passing the law. Some severe cases involve gang and drug activity, prostitution, drug sales and assaults. The criminal activity can also be associated with severe pest infestations, filth, building and fire code violations and unpermitted construction.

These issues have a cost to the city, not only police and code compliance staff time, but also the cost to surrounding property in lost economic activity and publicperception.

Most of the existing motels were built at a time when motor court and roadside motels were popular with travelers. According to the El Cajon Planning Commission, in recent years, many of these motels have fallen into disuse as motels for travelers and have now become a form of short or long-term housing.

Over the past few years, there have been a number of incidents with motels that indicate closer monitoring is needed.

In 2014, a motel on North Mollison Avenue was referred to code compliance after a drug-related violence call. City staff found the motel in an extreme state of filth with severe pest issues including bed bugs and cockroaches. There was a host of building and fire safety code violations, which constituted a severe and immediate threat to the health and safety of the occupants. The property was declared substandard and the residents were relocated. Over several months, the property owner worked with the City to make repairs.

In 2015, two other motels were also inspected after several complaints and a fire broke out. They were found to have building and fire safety violations. In 2016, another motel was inspected after a police raid involving gang activity. Similar safety and habitability issues were discovered.

Motel rooms often lack kitchen facilities and are not intended for permanent residency. However, in motels with long-term tenancy, rooms were being adapted for cooking and other uses that pose fire safety risks or other hazards. Before the ordinance was passed, there were no regular inspection of motels. Once a complaint had been made or issue discovered, these motels were often found to be in such a degraded condition, that a significant amount of rehabilitation work was needed to bring them up to code.

The purpose and intent of the new ordinance is to protect and promote public health, safety, and welfare of employees and customers of lodging establishments and the community at large. The performance standards for existing hotels and motels include:

Now that these standards of operation are in place, hotels and motels are expected to abide by them. However, there is a mechanism for the public to identify to the City of El Cajon properties that appear to be out of compliance. If you feel a lodging establishment is not following the law, you are encouraged to call Code Compliance at 619-441-1742 or file an online complaint. 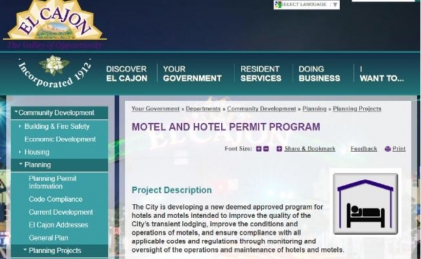 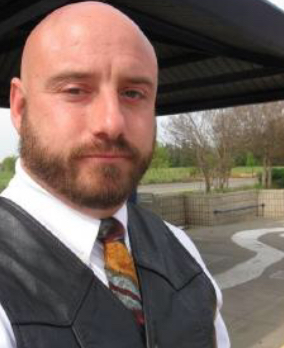 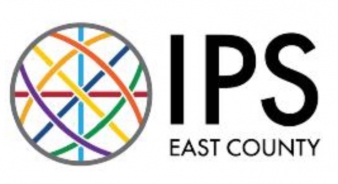