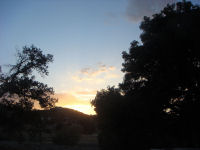 Increase your enjoyment of living!

October 30, 2011 (Boulevard) -- At 6:20 am I walked into the sun. Tormented by drama in my mind, it took a while to sink in. It was a cool morning, about 64 degrees. I was walking up a sweat. And then I saw. I saw the beginnings of color of the sunrise. The clouds were gently dancing across the sky that was bluing before my eyes. The underside of the clouds became tinged with yellow with the shining of the sun.

I continued walking into the sun. The lower edges of clouds looked as if lit from within, a reflection of the oncoming brighter light. Low in the horizon there was another bank of clouds. Sometimes when you watch the clouds and the sun behind you can see beams shining down to earth. This morning the beams bubbled up from the cloudbank and looked as if there were handfuls of molten lava interspersed with clouds.

And the sheer magnificence of this act of God brought the tears of my heart to flow from my eyes. At 6:20am this morning, I walked into the sun.

One could stop right there and just savor the moment. Stopping MY mind, however, is impossible. My friend says, “Sharon, not everything is a lesson” but I could not help noticing all the fellow early morning exercisers coming my way. Not one person knew the drama in the sky behind them. Not one was just standing there turning 360 with jaw dropping in awe. Everyone walking or running west totally missed it.

I have written before about the sense of 360 but it concerned awareness of danger. The awareness of beauty of nature is also a good result of the sense of 360. I must say that often my mind is elsewhere than my physical body, and so there is much that I miss. Because of this experience, I have resolved to focus on being fully aware of the here and now. If distracted by mental chatter, I resolve to check frequently so I will not miss out. 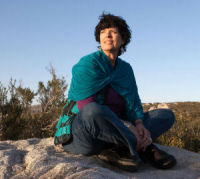 I invite you to stop and take a slow 360 look around you at the incredible beauty in our world. We live in beautiful sunrises and sunsets in the East County. Just open your eyes!
The Purple Mountain Sage welcomes questions from readers!  Write to us at: askthepurplemountainsage@gmail.com.
The Purple Mountain Sage is Sharon Courmousis, co-owner of Sacred Rocks Reserve and RV Park, a 163-acre wilderness preserve and campground in Boulevard, CA, which is also home to Sacred Rocks Artists’ Colony. She leads people on personal journeys that transform their lives. Sharon can be reached by calling: 619-766-4480.  Visit the Sacred Rocks Reserve website at: www.sacredrocksreserve.com.