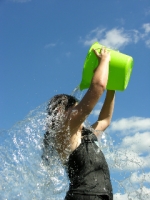 Increase your enjoyment of living

“Summer is the time when one sheds one's tensions with one's clothes, and the right kind of day is jeweled balm for the battered spirit. A few of those days and you can become drunk with the belief that all's right with the world.” ~ Ada Louise Huxtable

This Summer: Get Naked, Keep Cool, AND Still Be Earth-Friendly! 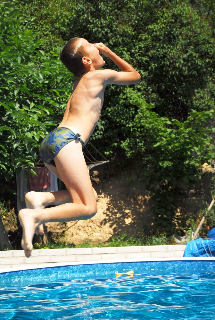 Summer arrives. Temperatures creep up. Bugs creep in, and on! I had 17 mosquito bites on me one morning after sitting outside enjoying the evening air. Bodies get warmer. Tempers flare. We seek the cool. The easy thing is to flip on the air conditioner. Is that the best thing? Is it best for our pocketbook or best for our planet? I say NO! I recollect the cooling methods I learned as a child, and still practice. Human invention is ever creative. When we seek comfortable bodies, and refuse the easy but expensive way, we can imagine many possibilities. We can make our world better.

As a kid growing up in a desert-ish town outside of Hemet, I never knew much about “A/C.” My granny had a swamp cooler – that was efficient and effective in hot and dry climates. Swamp coolers are still available, not expensive, but still use electricity. My folks did not have one, but when the temperatures got over 100, even to 115 in the summer, they opened all the windows on both sides of the house and turned on the rain-bird sprinklers. It was a ‘mister’ system for an entire house. We cannot do that now because of water conservation.

My husband’s people, Greek, but born and raised in East Africa where the temperatures in the eight hotter months ranged 120-135 degrees by each mid-day, had systems for staying cooler. They worked mostly early in the day, before noon. The houses had thick walls, even two to three feet thick, made of stone and mortar. The floors were cement. The ceilings were high with large fans in the middle. The cooking was done outside in a covered veranda, and only once a day. Around 11:30 his mom would go into the room with a bucket of water and get the floor and sleeping cots wet, and set the fan on high speed. After the noon meal the family went inside the rooms, stretched out on the cots and slept, often for three to four hours – a siesta. When the temperature dropped, around 5:00, then everyone went back to work for three hours or so. 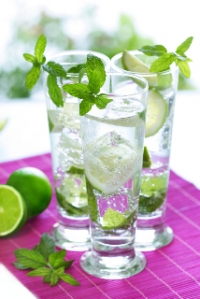 There are a few things we can learn from our ancestors even if not all are practical. There are also new and scientific understandings of information. Nothing stops each of us from studying the question of how to keep cool and implementing ideas, according to the level of expenditure and effort with which we are each comfortable. I read a while ago about a passive cooling system that was done with 6 inch pipe, buried in a 200 foot long trench 10 feet deep, with a small fan on the outer end, blowing air through the pipe into the house. They dropped the temperature inside 15-20 degrees.

From experience I know that if you open the house up in the morning and close all the windows and curtains by about 10 a.m., the house usually remains cool until around 4 p.m., then, you can open up again. At Sacred Rocks many of us live in RVs, pretty well insulated but thin-walled compared to a house. We open a window high up, or set a fan to blow air out of the hot side of the RV, and open a shady side window to bring cooler air inside.

What I’ve noticed in the mountains is that we have very low humidity and even the hottest days are manageable if we plan in advance. We already know these things but it does not hurt to be reminded.

• Open the house up in the cool morning
• Run errands by 11am
• Cook with slow cookers instead of on the stove or in the oven
• Wear a hat to keep your brain cool! And protect your skin
• Put on a wet bandana around your neck for your own personal cooling
• Figure out how to get the hot air out of your house
• Go swimming or take a cool bath
• Put up some misters on your shady porch
• Go to a movie in the middle of the day and enjoy the cool
• Get naked at night

Running your A/C is only one option for living. It is not a requirement. With some time and effort you can implement some of these ideas, and lower your electric bill, and help your children learn more earth-friendly practices. 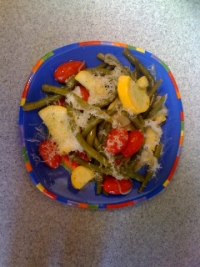 Directions: Heat oil in a large skillet over medium heat. Add onion and oregano and cook, stirring, until softened and beginning to brown, about 2 minutes. Add wine (or broth) and bring to a boil. Add green beans, reduce heat to a simmer, cover and cook for 10 minutes, stirring once or twice. Add summer squash (or zucchini) and tomatoes and continue cooking until the vegetables are tender, 8 to 10 minutes more. Season with salt and pepper. Serve sprinkled with Parmesan. 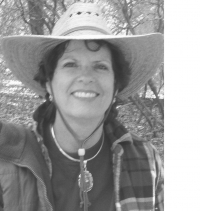 The Purple Mountain Sage welcomes questions from readers! Write to us at: askthepurplemountainsage@gmail.com. The Purple Mountain Sage is Sharon Courmousis, co-owner of Sacred Rocks Reserve and RV Park, a 163-acre wilderness preserve and campground in Boulevard, CA, which is also home to the Sacred Rocks Artists’ Colony. Sharon can be reached by calling: 619-766-4480. Visit the Sacred Rocks Reserve website at: www.sacredrocksreserve.com.