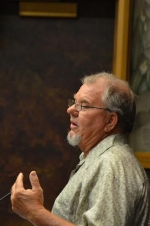 September  18, 2014 (San Diego)-- Robert Germann,  spokesman for Citizens Against Gillespie Expansion (CAGE), spoke before the Board of Supervisors on Tuesday to make a presentation. He wants to know the reason for a large increase in funds allocated for Gillespie Field airport that has been kept hidden from the public.

He told the Board, “According to the California Division of Aeronautics, Gillespie Field is slated to receive nearly $417 million."

He added that the Federal Aviation Administration (FAA) will give the El Cajon Center $10.63 million. Yet the County stated that the field is only going to receive $232,070, said Germann. He asked why there is such a discrepancy?

Germann added that Gillespie is projected to receive four times as much funding from 2014-18 than what they received in the previous eight years combined.

Before the Board meeting began, he told East County Magazine that Gillespie is going to be expanded, but that “they are not telling the people why it is getting expanded.”

If the reason was good for the public, the Board would promote it, he suggested.

The center is going to train pilots, air traffic controllers and mechanics from the Pacific Rim nations, as well as India, as ECM previously reported.  Supervisors recently attempted to regulate this by requiring background checks on these pilots. A Congressional bill that would have closed loopholes, which 10 News reported on in the past, failed to pass.

The airport expansion has been a topic of controversy for some time, as KPBS previously reported.

He also voiced his belief that funds will be used to expand the training of foreigners in a declining industry, general aviation, that is taking jobs away from Americans. Germann believes the intent is to move the training center from Wichita, Kansas, the heartland of aviation, to San Diego.