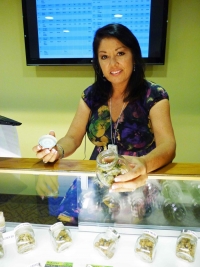 The medical marijuana cooperative facility located in an industrial area near Gillespie Field in El Cajon is facing imminent eviction which would effectively shut down the operation despite the lack of a direct legal challenge by the federal government.

“The lack of a straight legal challenge by the U.S. Government to California state law or even San Diego County’s licensing of the cooperative is a slap in the face of California voters and the right of states to regulate medical marijuana,” said Robert Reidel, spokesperson for the cooperative. “We intend to announce a challenge to the U.S. Attorney and take whatever steps are necessary to continue to provide medical marijuana to the 70,000 plus patients in need in San Diego County.”

Attorney General Eric Holder and his U.S. Attorneys have indicated they are not targeting medical marijuana establishments in compliance with state law. However, this and other federal actions indicate otherwise. Just days after Attorney General Holder testified before Congress in June that his Justice Department would only undertake enforcement action against medical marijuana organizations operating "out of conformity with state law," armed federal agents raided El Camino Wellness, a respected -- and fully permitted medical cannabis dispensary in Sacramento and asset forfeiture proceedings were filed against the longest standing permitted dispensary in Oakland, Harborside Health Center.

The U.S. Attorney’s office in San Diego is using the same tactics to attempt closure of Mother Earth’s Alternative Healing Cooperative, said Reidel. This comes despite full compliance with California state law and certification by the County of San Diego. The San Diego County’s Sheriff’s Department has inspected and certified the facility as legal and in compliance.

“California state law is clear. San Diego County regulations are clear. We have complied with both,” said Reidel. “This is a conflict between states and the federal government and needs to be resolved in a manner which ends this insane waste of federal tax money and resources. Pursuit of legitimate and legal medical marijuana facilities is the ultimate example a futile federal drug policy. This federal folly must end.”

The advocate’s press conference will take place at 11:00 a.m. in front of the U.S. Attorney’s Southern District Office of California at the Federal Office Building located at 880 Front Street in downtown San Diego.

Looks like the cartels are buying a few lawyers. Gotta' push those drugs. The government takes our money to tell us not to smoke and to pay for the costs of smoking but we are supposed to be fine with letting our kids think it is fine to smoke dope? That is as bad as selling guns to cartels to kill its citizens and our law enforcment officers. Oh wait a minute we do that too. What happened to America?