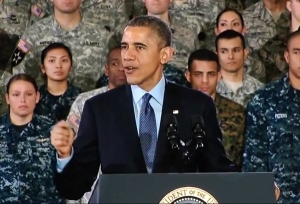 On Sunday, the U.S. and NATO held a ceremony at their headquarters in Kabul to mark the end of combat in Afghanistan.

U.S. Army General John Campbell, commander of the international Security Assistance Force, stated, "Today marks an end of an era, and the beginning of a new one."  He added that the 13-year combat mission was “filled with significant achievements and branded by tremendous sacrifice."

The war killed over 2,200 Americans and wounded nearly 20,000.  At the peak of the war, the U..S. had 100,000 troops in Afghanistan. President Barack Obama says the past 13 years have “tested our nation and our military.” During his administration, 90 percent of the troops have come home so far.

Roughly 10,600 troops will remain in Afganistan to train, advise and assist Afghan security forces in a new mission called “Resolute Support,” which also includes air support from any attacks by the Taliban. A portion of the troops remaining will be special  forces.

That number is predicted to be reduced another 50% next year and by the end of 2016, the goal is to have no U.S. forces left in Afghanistan except at the embassy in Kabul.

Afghan troops also suffered high casualties in the war, which killed over 9,000 Afghan troops and policemen fighting the Taliban. In addition an estimated 10,000 civilians have been killed, according to the United Nations.

Not really, so I put it in quotes. Besides NATO's “Resolute Support" there will be resolute US military attacks against considerable Taliban and al-Qaeda forces, called "counter-terrorism." (More quotes.) PS: The Iraq war didn't end either. Wars are easy to start and somewhat impossible to end, even when victory is impossible.
We still have support troops in Korea, well over a half century over that war "ended." It would be more accurate perhaps to say that the vast majority of combat troops are coming home.