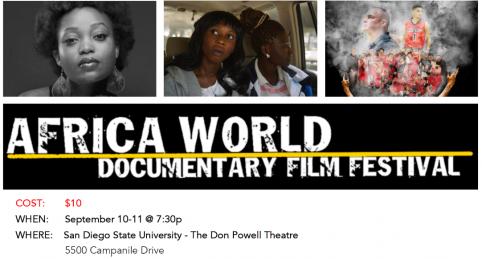 East County News Service
August 28, 2019 (San Diego) - The Africa World Documentary Film Festival (AWDFF) closes its 2019 season in its new home, San Diego. This year the traveling festival was screened in Nigeria, Ghana, Thailand, Pennsylvania, New York, South Africa and Trinidad.  It will be at San Diego State University’s Don Powell Theatre on September 10 & 11. Then on September 12, the festival will conclude at the SDSU School of Art Downtown Gallery.
The 2019 selections include powerful and gripping documentaries from around the world about the suppression of the black female voice, men’s basketball, black hair, the rise of female drummers in Africa, activism, contemporary dance in Ghana, a mother’s migration to France, The Tivoli Incursion and Kenyan house maids in Saudi Arabia.
AWDFF is committed to the promotion of the knowledge, life and culture of people of African descent around the globe.
This is the first year that the festival is hosted in San Diego. The festival was started in 2007 by Niyi Coker.  Dr. Coker brought the festival with him when he was appointed as Director of the School of Theatre, Television and Film at SDSU.
Selected documentary films ehance the understanding of the cultural unity inherent in the African Experience.
COST: $10
WHEN: September 10-11 @ 7:30 p.m.
WHERE: San Diego State University - The Don Powell Theatre
5500 Campanile Drive
San Diego, CA 92182
COST: FREE
WHEN: September 12 @ 7:30 p.m.
WHERE: SDSU Downtown Art Gallery
725 W. Broadway
San Diego, CA 92101