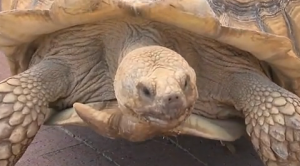 August 5, 2014(Santee)--You might say that it’s a slow news day in Santee—where an African desert tortoise weighing 60 pounds has been found roaming the streets in a residential neighborhood.

The person who found the tortoise notified a local resident, Debbie Kezele who owns two desert tortoises, believing they might be hers.  10 News reports that Kezele has taken the large tortoise in temporarily and is now searching for its owner.

She has called the Tortoise Society and listed the missing tortoise on Craig’s List in hope’s of finding the owner of the tortoise, who has a crack on the back of his shell.

African tortoises start out small, tiny enough to hold in your hand.  But they can grow to be enormous, eventually tipping the scales at 200 pounds or more—and they can live for 150 years.  They have voracious appetites, can eat up the foliage in a backyard and may be aggressive toward other pets—traits that sometimes lead owners to abandon tortoises.

No one knows how this tortoise, now nicknamed “Monstro” came to be roaming around Santee. But if his owner doesn’t step forward soon, Kezele says she will be asking the Tortoise Society for help to find a new owner to adopt Monstro.