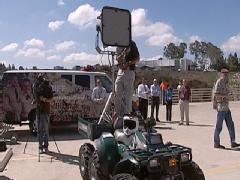 September 16, 2009 (San Diego) – San Diego County Sheriff’s Department notified media today that it would hold a demonstration of its highly controversial “sonic weapon.” What was demonstrated, however, was only the loudspeaker capability of the device—a feature which has effectively been used in search-and-rescue operations and to broadcast messages during a sandcastle contest. The sonic weapons switch, capable of emitting tones loud enough to damage ear drums or worse, has now been “disabled,” Sheriff’s Lieutenant Ed Musgrove informed the media at the end of the event. (View our video: http://www.youtube.com/watch?v=ulkl5Lw5gm8) But concerns remain.

“If you accidentally flip that switch and someone is within a 30-foot range, they can have their eardrums burst, bleeding in the inner ear, and it can result in an aneurysm or death,” reporter Kim Dvorac from Examiner.com said in an interview on KCBQ radio’s Rick Amato show last night , citing a source in the Department of Defense http://www.amatotalk.com/podcasts/AMATO-09-15-09-HR1.mp3 .

“The officers shown at this town hall meeting (for Susan Davis) were using this within 30 feet of townhall attendees and other officers,” she added. Dvorac published two stories on the Sheriff’s deployment of LRADs (long-range acoustic devices) after East County Magazine) broke the story on Friday http://www.eastcountymagazine.org/?q=node/1874 , creating a firestorm of controversy.

As we reported, LRADs have been used to repel insurgents in Iraq and to prevent piracy of ships aboard the high seas. Dvorac, who said she has spoken to various sources who have served in the Middle East and who are familiar with the use of LRADs, added this clarification. “They are also using this over in Iraq and Afghanistan to target terrorists in crowds, to take them out and save people around them…This can be pointed directly at you and it will burst your eardrums, but the person on the right or left will not be harmed by this.” She added that she could find no support in her research or among experts interviewed for use of LRADs as crowd control devices—the use for which Sheriff Gore says he purchased the device.

Our story, a joint investigation with Liberty One Radio, sparked a flurry of comments critical of the Sheriff, drawing national media coverage. USA Today picked up the story, along with major conservative and liberal blogs. At a Sheriff’s debate Saturday co-hosted by ECM editor Miriam Raftery and KCBQ Radio’s Rick Amato, the crowd turned unruly when a question about the sonic weapons was posed by Dvorac. Three other candidates for Sheriff condemned Sheriff Bill Gore for approving LRADs at public rallies. 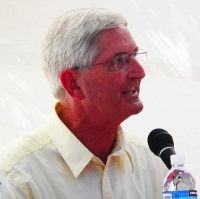 In the debate, Gore confirmed that “the crowd was purchased as a crowd dispersal” that was “held in reserve” as “a non-lethal type of device to disperse crowds should there be the need…” Other alternatives would include pepper spray – an analogy that quickly drew references to the recent pepper-spraying of guests by a Sheriff’s deputy at Democratic Congressional candidate Francine Busby’s fundraiser. Gore also stated in the debate that the LRAD “doesn’t burst eardrums” and said volume and frequency are controlled on the side of the device.

At a demonstration today held at a Sheriff’s station in San Diego, however, Musgrove told the media that “essentially what this is is just a voice amplification system.” He said the device has been used to broadcast information in English and Spanish at a sandcastle building event in Imperial Beach and its directional sound capabilities have been used to successfully locate missing people during search and rescue efforts in East County’s canyons and mountains. The LRAD is more effective than a hand-held microphone for broadcasting messages, he added, because it can reach beyond 300 meters.

Asked if there has been much opposition to the device, he replied, “We’ve gotten really little feedback from the public,” adding that feedback from law enforcement personnel has been positive. “I don’t think this thing is controversial,” he stated later.

Asked if the LRAD could hurt someone’s eardrums, the Sheriff’s representative confirmed, “Absolutely, any device that amplifies sound can…When you get into the red area, the manufacturer recommends not having someone in front of it for 75 meters, 200 feet.”

He defended the device as a “good acquisition” and confirmed it was purchased with a Homeland Security grant.

Asked by another reporter if it could be used to disperse crowds, he replied, “This particular device can do that, however ours, we’ve disabled that and taken it out completely.”

Whether that meant the switch has been removed, or merely turned off, however, was not clarified.

Musgrove insisted the device is only being used for good.

"So, it will never be used in San Diego as a weapon?" asked 10News' Ariana Duarte.

All three candidates running against Gore for Sheriff criticized the Department for purchasing the LRAD.

“They are very, very lethal weapons,” said Jay LaSuer. “they are military weapons. They have no place in law enforcement. Why in the name of God you would take one when a United States member of Congress has invited people to come speak about health debates that’s going on right now, I don’t know. Probably the majority of these people are Medicaid recipients, so you probably have terrorists on walkers,” he quipped, then turned to Gore: “You have deployed a weapon to be used potentially against American citizens…shame on you.”

“I don’t think it belongs in our arsenal,” said Jim Duffy. “Why was it at that forum? It should never have been purchased and secondly, should not have been deployed in that environment.” He further criticized the $40,000 cost (including a training program) as a waste of taxpayer money.

Bruce Ruff, the third candidate, faulted Gore for buying “whiz-bang gadgetry with your money.” He noted that deputy sheriffs were not protected (a photo showed deputies close to the device with no protective earphones).

KCBQ radio host Rick Amato suggested that the Sheriff targeted what the Department viewed as “crazy right-wing racist extremists showing up with teabags” at the town hall forums.

Dvorac noted that Congressman Duncan Hunger (R-Alpine) was also speaking at Darrell Issa’s town hall forum in Vista, where the LRAD was deployed. “The Congressman was unaware,” Dvorac said. She added “Hunter, who actually served in Iraq, knows of these weapons and was quite concerned that this was not the place for these weapons.” Issa was also unaware that an LRAD was present at his rally, Dvorac stated.

She defended the public’s concern over Sheriff Gore’s deployment of the LRAD at public rallies. “If he can’t handle this type of situation, or will handle it in the same manner that he handled the Ruby Ridge incident, people have a right to question that, because this is about their safety and the safety of the community,” she said, referring to Gore citing his Fifth Amendment right against self-incrimination in refusing to testify during an inquiry into the Ruby Ridge incident in which he participated as a member of the FBI S.W.A.T. team and head of the FBI’s Seattle office.

Dvorac called use of the device as a loudspeaker “overkill.” She observed, “A P.A. (public address) system would be a lot cheaper than the $40,000 the Sheriff’s office put out for this device…and there is a lot of training required that you need to know going in and using something of this nature…I would hate to see kids at a sandcastle contest and something disastrous happens. There is always the opportunity. It’s been explained to me by people who are familiar and have actually used and handled it, that you could brush up against it and a switch could go off, and this could result in death.”

The reporter confirmed that the manufacturer American Technology Corporation in San Diego, markets the device on its website for use against terrorists in Iraq and Afghanistan, and to repel pirates. She concluded,“They don’t market this as something you can use at the beach for kids with a sandcastle building contest.”