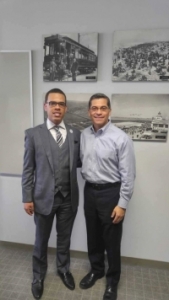 “The two-hour discussion ended with commitment from the Attorney General on Criminal Justice/Police reform being a priority for him so much that he is seeking to look into a more fairer and more independent investigation process concerning officer involved shootings,” said Rev. Harris in a statement issued after the meeting.

Becerra told the civil rights leaders he will “work closely with us on issues like officer involved shootings and that he will commit to putting together a state advisory committee on the civil rights division,” said Harris, adding that he will serve on the committee. Harris said Becerra also agreed to meet with the family of Alfred Olango within the next couple of months.

Harris said he is “very pleased” by the discussion and the steps outlined by the state Attorney General. “Although I do not know what the outcomes will be I am confident the families we are working for will get some kind of closure and justice. We are one step closer than before and that is what is important,” he concluded.

Olango, an African-American man whose sister called 911 for help during a mental health crisis, pointed a vaping (smoking) device at a police officer, who fired the fatal shots. The officer claimed he believed the device was a gun.  District Attorney Bonnie Dumanis found the killing justifiable.

Rev. Harris contends that independent investigations should occur in such cases because of the “mistrust of local law enforcement agencies and District Attorneys”.

Olango’s family has filed a lawsuit against the City of El Cajon, however. Critics of the shooting have also questioned why officers did not wait for a psychiatric emergency response team (PERT) to be dispatched before moving aggressively toward Olango.