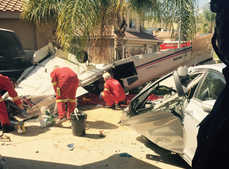 “What if the next touch and go crash takes out a school in session?" – a resident’s letter to Supervisor Dianne Jacob

September 21, 2015 (San Diego’s East County) --After a plane crashed into a Santee home on September 3rd, killing the pilot and a flight student near Gillespie Field, Advocates for Safe Airport Policies or “ASAP” is calling for action to protect community members. ASAP has made many complaints to officials before this crash, which is the latest in a string of crashes and serious mishaps involving planes at Gillespie. But recently residents have warned of frequent and low flights over homes due to an increase in flight school training of students at Gillespie Field.

Now ASAP is holding a meeting for concerned airport neighbors. The event will be held September 30th at a private home in Fletcher Hills.  To RSVP and get the addresss contact suestrom1@cox.net.

Residents want to file a class action suit. So far, over 50 households have committed to join a lawsuit, says ASAP representative Sue Strom, but the attorney consulted by the group wants more plaintiffs before filing the case.

ASAP says when families moved near the airport, it was not used as a commercial air academy for multiple air schools – and they’re concerned that novices practicing over their homes puts public safety at risk.

There have been numerous past crashes and emergency landings involving planes at Gillespie, including several serious accidents linked to the flight schools. Major incidents include:

ASAP is  encouraging residents to write to Supervisor Dianne Jacob to ask for more restrictions on flight schools.

One resident, who asked to have name withheld, has sent a letter to Supervisor Jacob that states:  “What if the next touch and go crash takes out a school in session? Will elected officials tell grieving parents that's the risk they took by sending their children to a school near Gillespie Field ? “

The Federal Aviation Administration is investigating the cause of the crash.  The airport and flight school representatives have previously denied flying too low over homes and insisted that all property safety procedures are followed by pilots and students.

I moved to Santee in the 80's and as far back as I can recall, there was flying lessons being offered by several businesses at the airport. This has nothing to do with alleged increases in traffic...or any other activity you would expect to find at an airport. It's about a group of self-centered home owners who see the opportunity to get rid of something they don't like...which was there when they bought their home...but didn't seem to keep them from buying it. If I were a judge, and they brought this action to my court, I would make sure the door swiftly hit them in the posterior after I berated them for wasting the courts time with a frivolous suit. I would then seek to disbar the lawyer for filing the suit on behalf of these people.