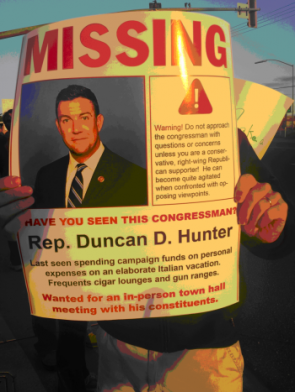 The move comes after several hundred protesters gathered  on all four corners outside Hunter’s El Cajon office and on an overpass above State Route 67 to protest his inaccessibility to constituents.

The Congressman originally had declined to hold a town hall despite repeated requests from constituents asking him to do so.  Residents voicing concerns over Trump administration policies and some of Hunter’s stances  did meet with a Hunter staffer in El Cajon, but had not been provided an opportunity to meet face-to-face with their elected representative.

Then Hunter’s staff advised members of the Indivisble activist group that their members would no longer be allowed to meet even with staff.  Members were told they would be arrested for trespassing and their vehicles towed if they showed up at the office or parked in the lot outside.

That prompted hundreds to turn out carrying missing poster signs for Rep. Hunter, along with signs objecting to his support for repealing Obamacare and rolling back environmental protections, among other issues.

How is it that citizens who are constituents can be arrested for "trespassing" in an office for the guy that is supposed to be their employee. Does he actually OWN his position? Seriously can't believe this guy is our rep.