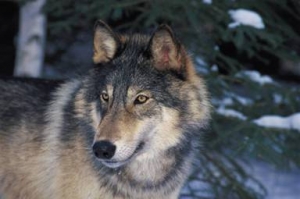 February 6, 2014 (San Francisco)--. — The California Department of Fish and Wildlife has determined that protecting gray wolves under the California Endangered Species Act is not warranted. The Department presented that recommendation yesterday in a status report given to the state’s Fish and Game Commission in Sacramento.

The report was initiated after the Commission accepted a petition to list the wolf as endangered in October 2012. The petition was filed by four conservation groups in February 2012 after OR-7, a lone wolf from Oregon, made headlines by entering into the state in December 2011, becoming the first wild wolf confirmed in California in almost 90 years. Wolf OR-7 spent over a year in California after his entry, then returned to Oregon in spring of 2013. He has forayed back into California several times for short visits, including in December 2013.

“We are puzzled by recommendation not to list, given that the state’s current known wolf population is only one wolf that intermittently comes into the state,” says Lauren Richie, Director of California Wolf Recovery for the California Wolf Center in Julian. “It’s hard to get more endangered than that.”

In the status review, the Department describes numerous potential threats to future wolf populations in California. However, the Department claims that wolves do not currently face these threats in the state because there is no population established yet and hence no data is available to support scientifically drawn conclusions about threats to the species.

At Wednesday’s Commission meeting, multiple members of the public and representatives of organizations stood up to testify. Nearly all testimonies were in favor of listing.

“We believe that affording wolves state protections is the best way to ensure the recovery of wolves in California. Regardless of what the Commission determines in April, however, the California Wolf Center is ready work with the Department and Commission to promote wolf recovery and implement solutions that foster coexistence with wolves,” says Richie.

Gray wolves are native to California, which still has suitable habitat and prey to support a wolf population. Although it’s uncertain how many wolves used to be in California, the last known wolf was killed in Lassen County in 1924 and wolves were likely broadly distributed in the state, according to the status report.

Wolf OR-7 is only the first to enter California. It is widely accepted that more wolves are expected to disperse into the state as Oregon’s wolf population continues to grow, Richie indicated. Human intolerance of wolves is the most important factor affecting their chance of survival.

Since the Commission accepted the petition to list the wolf in 2012, the wolf has had temporary state protections as a “candidate” species for listing until a final determination is made. In spring of 2013, the Department issued a public notice seeking information related to the status of the gray wolf in California. It received over 5,600 emails and letters in support of listing, and 40-50 in opposition.

The Commission is expected to receive more public comment and make a final decision on the gray wolf listing at its April meeting in Ventura.