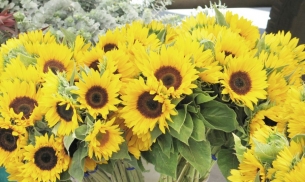 June 20, 2018 (San Diego) - Agriculture values sprouted for a second straight year in the annual County Crop Report, helped by 20-plus percent increases in the value of lemons, miscellaneous vegetables and tomatoes, and a continued renaissance for oranges.

Total production values in the new report were led by the same major agricultural players that have dominated the Top 10 list for the last decade — ornamental trees and shrubs like crepe myrtles and bottle brushes; indoor plants like bromeliads and poinsettias; and garden flowers like marigolds and snapdragons.

The crop reports, which can be seen online, are yearly snapshots of an industry that has been an important staple of San Diego County’s total economy, but one that has faced challenges, including droughts, the cost of water, fires, freezes, pests and diseases.

Despite those challenges, total agriculture production values have increased in seven of the last 10 years. 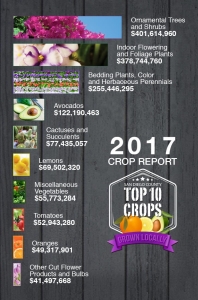