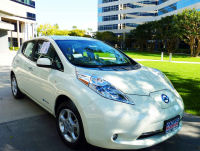 “Clean transportation plays a critical role in meeting our state’s long-term air quality goals, and we know that California’s tough vehicle standards draw infrastructure investments and continue to drive innovation,” Roberts said. “This is one reason why California leads the nation in the clean transportation race.”

Now in its third-year of funding, CVRP promotes the purchase of zero-emission or plug-in hybrid passenger vehicles. During the past two years, $11.1 million, including $2 million provided by the California Energy Commission, funded approximately 2,000 rebates. During the current fiscal year, the ARB allocated an additional $15 million to the CVRP, which will fund 6,000 to 8,000 rebates, depending on the mix of vehicles.

The program incentives are available for electric, plug-in hybrid electric, fuel cell vehicles and electric motorcycles. Rebates are dependent on vehicle type, model year and fuel technology and range from $900 to $2,500.

The CVRP is part of statewide efforts to reduce air pollution and greenhouse gas emissions by increasing the use of cleaner transportation, according to David Almeida, CCSE’s CVRP program manager.

“Funding for the Clean Vehicle Rebate Project for fiscal year 2011-2012 represents a three-fold increase compared to last year,” Almeida said. “This significant investment will help California residents make the switch to a cleaner, more efficient vehicle, creating cleaner air for all of us.”

The Clean Vehicle Rebate Project is part of ARB’s Air Quality Improvement Program, established by AB 118 (2007, Nunez), to reduce smog and diesel particulate pollution and greenhouse gas emissions. Through AB 118, ARB also funds the early introduction of heavy-duty hybrid and electric trucks, as well as demonstrations for advanced locomotive and hybrid construction equipment. Depending on revenues, the program has $30 million to $40 million per year in funding through 2015 for clean vehicle and equipment projects.

The state’s early investment in zero-emission and plug-in hybrid technologies will prime the market for the larger number of these vehicles needed over the next decade and beyond, according to the ARB. Funding for these programs is generated from revenues from smog abatement, vehicle and vessel registration fees.