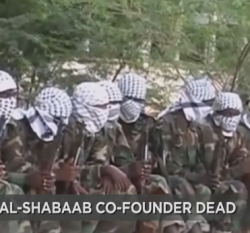 September 9, 2014 (San Diego’s East County) - The Pentagon confirms that a U.S. air strike has killed the co-founder of al-Shabaab, an Al Qaeda affiliated terrorist group based in Somalia.

Pentagon spokesman Rear Admiral John Kirby says that removing Ahmed Godane from the battlefield is a major symbolic and operational loss to Al Shabaab as the U.S. works with its allies to curb regional and global threats posed by violent extremist organizations.

Al Shabaab was behind the bombing of a shopping mall in Kenya and has also spread its violence into Uganda.

In San Diego’s City Heights neighborhood, which has a thriving population of Somali immigrants, local Somalis hailed the announcement as great news.

Mohamed Ahmed built a school in Somalia with a group called CURE Africa.  He now lives in City Heights but hopes to return to his homeland someday.  Ahmed told KPBS that news of the al Shabaad leader’s death brought relief to local immigrants with family in Somalia—and also to Somalis here who are worried about terrorists recruiting their children here in America.

Ahmed works with young people and says he is not aware of any current recruitment efforts by Al Shabaab here, but the terrorist group’s recruitment of 23 Minnesota teenagers has worried some parents here.

In 2013, four Somalis from San Diego were convicted of conspiring to provide support to al Shabaab, including an imam at a local mosque. A UC San Diego student, Jehad Mostafa, remains on the FBI’s most wanted list of terrorists after he was indicted five years ago for aiding al-Shabab.