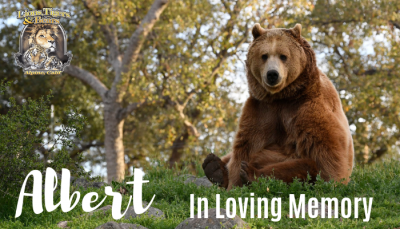 East County News Service
August 24, 2019 (Alpine) – Albert, a rescued grizzly bear, won hearts and made headlines when he arrived at Lions, Tigers and Bears in Alpine along with his sister, Cherry Bomb and two Himalayan black bears in 2014.
But yesterday, the bear was euthanized after an examination by veterinarians under anesthesia for evaluation of a rapidly progressing upper airway disease found infiltration of his nasal passages and sinuses consistent with destructive cancer.
“Due to the extent and severity of his disease, complications during his anesthesia, and poor prognosis, we said goodbye to Albert during his procedure,” says  Bobbi Brink, founder and director of the Lions, Tigers and Bears rescue facility. Samples were taken to understand the disease.
She adds, “This loss just breaks my heart,” then recalls when Albert first arrived at the facility after being rescued in North Carolina and making the 5,000 cross-country journey to Alpine. At first, the bear was hesitant to emerge into his new forever home, but soon made the leap, winning the hearts of keepers, volunteers and visitors.
Brink says Albert was a “special rescue” because he defied the odds, overcoming a tragic beginning and physical malformations from poor nutrition and confinement as a cub.
At Lions, Tigers and Bears, he soon thrived as a “happy bera that took full advantage of all that our sanctuary had to offer,” says Brink, who recalls that pool time was Albert’s favorite as he would “splish and splash to his heart’s content.
“Albert's time has been cut short, but the moments he spent at Lions Tigers & Bears were filled with love, laughter, and happiness and for that, we are forever grateful,” says Brink. 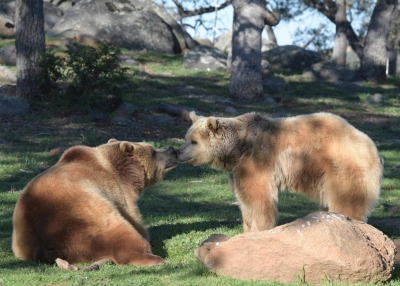 Click to learn more about Albert and his rescue story.

If you wish to make a donation in Albert's honor, click here.