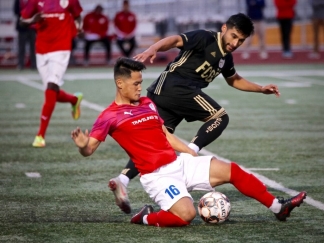 April 29, 2019 (San Diego) - After a three week hiatus from NPSL regular season league play, ASC San Diego was back in action on Saturday on their home pitch at Mission Bay Stadium. The match against FC Golden State was an opportunity for the home side to secure an important 3 points in a highly contested race toward the postseason in the Southwest Conference. ASC San Diego was also seeking redemption after a 3-1 away loss to the Force earlier this season which was magnified by injuries to starting goalkeeper Jean Antoine and defender Khadim Seye.

Billed as a thriller coming in, the game lived up to all expectations coming down to the final touch.  Early on, both sides struggled to find rhythm, though Golden State created the first scoring opportunity in the 6th minute with a shot that sailed over the bar. Much of the first half was an exchange of fouls and free kicks between the two sides, though the atmosphere was special as everyone knew the significance of the match.

ASC got more comfortable as the match went on though could not take advantage of their several promising goal-scoring opportunities in the first half. Winger Dallin Cutler created multiple chances alone in his matchup with Force’s Colin Liberty but was unable to find the back of the net. In addition, Mike Semenza created havek on the right wing though was unable to capitalize when it was needed.

Against the run of play, a 34th minute penalty was awarded to FCGS after a poor challenge by Sergio Enriquez tripped up Travis Bowen.  While Antoine’s attempt to save the penalty was fingertips away, Bowen slipped in his kick to the left of the keeper and the visitors earned the first goal of the game.

Just before half, Semenza found himself on the end of a beautiful 40 yard diagonal ball from Chris Gardea that left him one-on-one with Force goalkeeper Luis Sosa. Semenza opted to try dribbling past the FC Golden State keeper only to be halted without getting off the shot. ASC went into the half trailing 0-1. 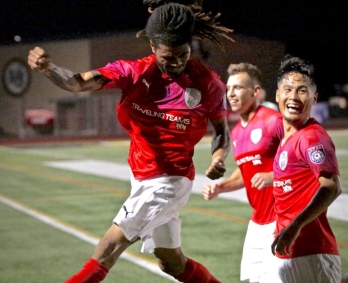 Throughout the night, ASC Goalkeeper Jean Antoine kept his side in the game by showcasing his athleticism and shot-stopping ability.  While Golden State was aggressive in attempting to score throughout, Antoine batted several balls safely over the goal and provided the “Play of the Game” after an ASC turnover in the defensive half of the field forced Antoine’s athleticism to shine early in the second half.

The ASC back line also provided some much needed defense against the high-scoring Golden State attack. Sergio Enriquez provided speed and fancy footwork combined with an unrelenting will to stick with the play. His effort along with defensive teammates Eijin Kishimoto and captain Kuba Waligorski were able to keep the opposing team at bay throughout most of the night.
Trailing 0-1 at the half, ASC San Diego came out of the break with a renewed spirit and ambition.  It took ASC only 3 minutes to score as new-comer and goal-scorer Elijah Rice found the back of the net on a half-volley 25 yards from goal.  It was Felipe Liborio’s chest that provided the assist to Rice which laid the foundation and inserted the necessary energy for the rest of the match.
With the score even at one, ASC’s confidence grew as they pressed Golden State throughout the field.  In an effort to hold onto their razor thin lead atop the conference leaderboard, the away side continued playing a very physical and aggressive match.  While trying to engage the home team into doing the same, ASC showed tremendous poise and discipline to these tactics. The match turned into ASC’s favor in the 81st minute when Golden State midfielder Marcelo Manfredini was shown red for violent conduct after stomping Eijen Kishimoto following a foul in the corner.  ASC San Diego took full advantage and pressed forward, past the 90th minute. In the fifth and final minute of stoppage time, Kishimoto sent a powerful cross into the box which found the head of Rice. His header beat the diving Sosa to the near post and locked up the 3 crucial points over the league leader.
The team is headed on the road Saturday, May 4th to play against High Desert FC at Adelanto Stadium. ASC will be looking to continue their good form away from home as they try to secure their 4th win in a row. Then, on Sunday May 12 it’s a double header at Mission Bay High School Stadium. At 2:00 p.m. ASC San Diego Women’s team will be at home to play their inaugural match against the San Diego Surf. Their match will be followed by their counterpart ASC San Diego men’s team playing FC Arizona at 5:00 p.m.