March 25, 2013 (Lemon Grove) – Lemon Grove Academy joined local efforts to educate students and parents of the dangers of drugs and alcohol in East County by hosting its first Underage Drinking Forum on Thursday. The event, which took place on March 21, featured a complimentary pizza dinner, a presentation by a local drug and alcohol expert, as well as a separate break-out session for youth.

Retired narcotics officer and Executive Director of The Proactive Network Against Substance Abuse, Phil Hubbs, educated a group of nearly 40 parents about current drug and alcohol trends. He also showed parents a display of various household items such as hand sanitizer, whipped cream canisters and keyboard cleaner that kids use to get drunk or high.

More than 25 students participated in youth break-out sessions, which were led by Mothers Against Drunk Driving (MADD) and Friday Night Live -- a youth group for high school kids to promote living healthy lives, free of alcohol, tobacco and drugs.

WHY ALCOHOL IS A PROBLEM

Research shows students in East County are accessing alcohol at a very young age and alcohol is playing a recurring role in the deaths and injuries of minors in San Diego County. A startling 28 percent of 5th graders in the Lemon Grove School District report having had at least a sip or two of alcohol at least once; 38% of 7th graders say they have had at least one whole drink of alcohol in their lives. Of those who drank, 34 percent report having had their first full drink of alcohol before age 13, according to the California Healthy Kids Survey.

From 2006 to 2011, 144 San Diego County minors, age 20 and younger, died with alcohol in their system – an average of 28 per year, according to the County Medical Examiner’s Office. Fifteen of these youth were from East County.

From 2006 to 2008, 650 young people from East County were treated at local emergency rooms with a diagnosis of alcohol abuse. 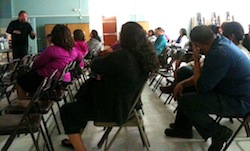 According to the 2011 Monitoring the Future Survey, the proportion of young people using any illegal drug has been rising gradually over the past four years, due largely to the steady climb in marijuana use and the sale and use of synthetic drugs, such as “Spice,” “K2” and other bath salt-type products.

Marijuana use among students increased in 2011 for the fourth straight year, according to the study, with daily marijuana use now at a 30-year peak among high school seniors in the U.S.

At the forum, parents were given information and resources to better address the topic of drugs and underage drinking with their kids. Parents were shown the risks, trends and ways to discuss drug and alcohol use with their kids and how to set a positive example and create a safe environment at home.

Students learned the dangers of drug use and underage drinking and the importance of making healthy choices.

Experts say education, open dialogue with families and community-based policies are critical to help students avoid and overcome the hazards associated with alcohol and drugs.