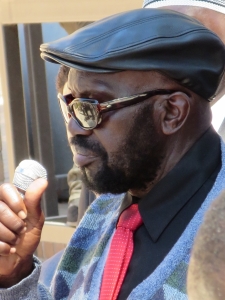 September 29, 2017 (El Cajon) – A one-year anniversary event commemorating the death of Alfred Olango, an African-American man shot and killed by an El Cajon Policeman, was held Thursday on Civic Center Way in downtown El Cajon, followed by a march to city hall and the police station. 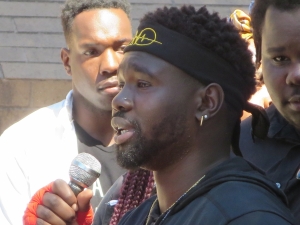 Speakers included Alfred Olango’s father, Richard Olango Abuka, who spoke movingly to a crowd of about 50 people.  He spoke about the death, and more importantly, the life of his son cut short, eliciting shouts and applause from the audience.

Olango was fatally shot after his sister called for help while he was suffering an apparent mental health crisis. Olango was wandering in a parking lot, but was not threatening harm to anyone at the time the call was made, which was reported as an incident involved a person with possible mental issues. 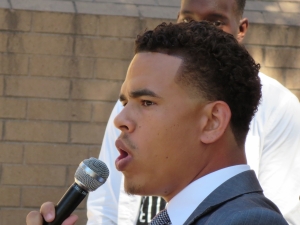 When an officer approached, video showed Olango pulled a vaping or smoking device from his pocket and pointed it at the officer, who fired.

The shooting triggered over a week of civil unrest in El Cajon, with marchers filling the streets and forcing shut down of businesses downtown and a regional shopping mall at Parkway Plaza.

The District Attorney’s office ruled the killing justifiable, but concerns have been raised about potential racial disparities as well as lack of a Psychiatric Response Team response.  (A PERT team was dispatched elsewhere at the time.) 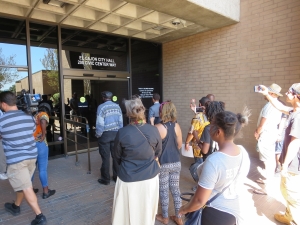 After the speakers finished charging up those present, they marched in unity into city hall shouting out Alfred’s name, demanding justice and the termination of Officer Richard Gonsalves. Civil rights leaders have called for establishment of a police review board by El Cajon, which has thus far not created one.

Rev. Shane Harris with the National Action Network, in a press release, criticized “the only Democrat on El Cajon City Council, Ben Kalasho, for denying to make attempts for police reform following the killing of Alfred Olango.” Rev. Harris also criticized Mayor Bill Wells for “not taking any leadership in reaching out to community activists and leaders over the past year.” In addition, Harris has asked the Attorney General to conduct an independent investigation into the shooting. 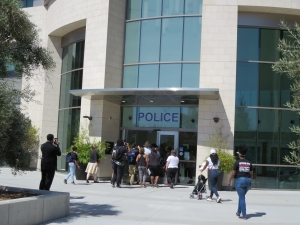 No one appeared from the city to meet with Olango’s family members or other demonstrators.

ECM reached out to both Wells and Kalasho for comments.  Wells did not respond. Kalasho refused to provide comments.  (Kalasho has refused to respond to interview requests from ECM and the Union-Tribune since these publications ran investigative reports on lawsuits involving Kalasho and conflict of interest questions.)

After leaving City Hall, the marchers continued, with the same chants, into the police station headquarters where despite the intense emotions of these community members, no official came out to speak with them at the police station, either. 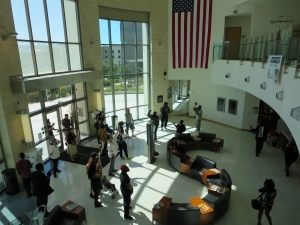 The shooting of Alfred Olango, along with other shootings of unarmed black men by police in California, did yield one measurable result:  then-Attorney General Kamala Harris, now a U.S. Senator, implemented a database for the public to have access to information of use of force incidents including fatal police shootings.

But how to prevent such shootings from happening, and spare families such as the Olangos the anguish they will always carry with them, while also keeping police safe from harm, remains an unanswered question. 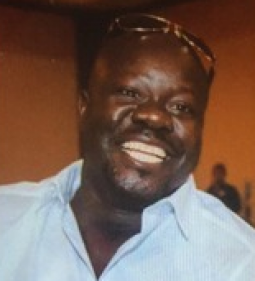