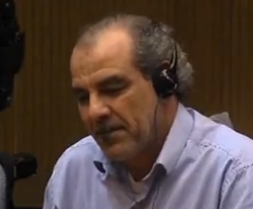 June 23, 2014 (El Cajon)--Kassim Alhimidi, an Iraqi immigrant who was convicted of bludgeoning his wife, Shaima Alawadi to death at their home in El Cajon in March 2012 has been sentenced to serve 26 years to life in prison.

He continued to insist that he is innocent and said he’d rather have the death penalty than serve out his sentence in prison.

Shaima Alawadi, a mother of five, had a note left near her body that read, “"This is my country. Go back to yours, terrorist." Police investigated the killing as a possible hate crime.

Her husband told police he was driving and not near the home when his wife was killed.  But after police doctored the date on a photo to show his van parked nearby, he reportedly admitted to being mistaken on the times but his lawyer said that may have been due to the recent time change.

At the sentencing hearing, the prosecutor read a letter from the couple’s daugher, Fatima, delivering a message to her father that read, “Mom lives with us every day, but you are the one who will be forgotten." Fatima found her mother lying in a pool of blood, still alive, in the home’s kitchen. She has said that image will leave her scarred for life emotionally.  She called 911, but her mother later died at a hospital.

The couple’s oldest son, Mohammed,  however, had this to say to his father.  "As much as I want to hate you, I can't. I do forgive you."