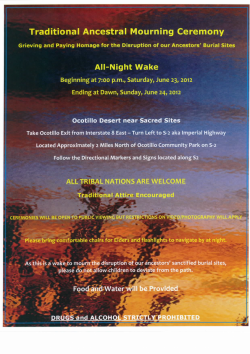 June 13, 2012 (Ocotillo) –  As bulldozers raze their ancestors’ graves, Native American tribes across the southwest are asking for the public’s help to stop the desecration.

If you believe this heartbreak funded by taxpayer dollars is wrong, please join with tribes of all nations to take a spiritual stand together against despoilment of these once protected desert lands for private corporate gain.

Determined to halt the Pattern Energy's Ocotillo Express wind energy project, tribes of all nations will gather for a traditional dusk-to-dawn ceremony to mourn disruption of their ancestors' burial sites. From 7 p.m. on Saturday, June 23 to dawn on Sunday, June 24, members of the public are encouraged to join with Native American neighbors in the Ocotillo desert for these spiritual ceremonies.

This land belongs to us all.  It is federal land, owned by the Bureau of Land Management. Our tax dollars are being used to subsidize the wind project, even though Native American sacred sites are protected under federal law. Thousands of artifacts, sacred geoglyphs, ceremonial sites and over a dozen burial sites have been found here. Despite this evidence, construction of over 100 turbines each over 450 feet tall has been approved on lands so sacred that local tribes believe the mountains here are where creation began.

Ocotillo is the first of 18 fast-tracked projects on formerly protected federal lands.  Next up, 40 massive-scale industrial energy projects are proposed in East County, most in Cleveland National Forest or on federal BLM lands.

Robert Scheid, spokesman for the Viejas Band of the Kumeyaay Indians, warns the public that if the fast-tracking process is not stopped, “what’s happening in Ocotillo today could happen tomorrow at a park in your backyard.”

To join this event, please bring comfortable chairs and flashlights.  Food and water will be provided.  Alcohol and drugs are strictly prohibited.  Restrictions on photography/videography will apply.

All ages are welcome, but please do not allow children to deviate from the path, since this is a wake to mourn disruption of ancestors’ sanctified burial sites.

To get there, take I-8 to the Ocotillo exit.  Turn left to S-2, which is also known as the Imperial Highway.  The encampment is located on S-2 approximately two miles north of the Ocotillo Community Park. Follow the directional markers and signs along S-2.

East County Magazine, has editorialized against the industrial wind project due to its destruction of Native American cultural resources, massive and irreversible environmental damage, and serious threats to the health of Ocotillo residents. ECM will lead a procession for all who are interested in carpooling from San Diego/East County to Ocotillo; details to be announced.  If you wish to rideshare or drive, please  contact editor@eastcountymagazine.org.