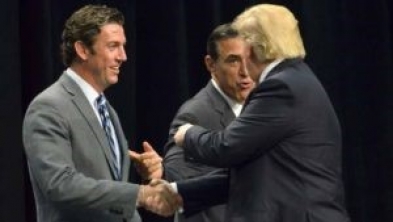 “We anticipate it being a really good event,” said Michael Harrison, the aide. ”And we’re confident and hopeful it’s going to be productive.”

So do leaders of Ramona TEA’d — a 600-member Tea Party offshoot — and a local Indivisible group urging its followers to arrive at Ramona Mainstage at 7 a.m. for the 10 a.m. event.

“We would hope for a civil and respectful exchange between the congressman and his constituents from both sides of the political aisle,” said Jim Fontana, a 20-year Ramona resident on the Ramona TEA’d steering committee.

“We’re asking people to join … the courteous vibe,” said Ludwig, a 42-year-old Alpine mother and homemaker. “We will have ‘disagree’ and ‘agree’ cards, so we’re not interrupting people” the way Town Halls nationwide have devolved, with shouting and chanting.

But Fontana, 77, fears that the “Left” will bring in people from outside Hunter’s massive 50th Congressional District to fill the 350-seat concert venue.

Taking seats to the exclusion of locals “is repugnant to us,” he said. 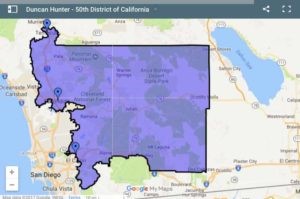 Ludwig — a Bernie Sanders supporter — defends her group as embracing Democrats, Republicans, Greens, Independents “and folks like me who have [no] party affiliation at all.”

She won’t guess how many will show up, but says: “We are far more organized than [Hunter supporters] are.”

One group — SanDiego350 — called on 50th District constituents to arrive early to “ask the questions. Other members can be outside with signs.”

“We’ll ask … about how Hunter plans to vote on climate issues, whether he will support California’s efforts to lead on renewable energy, and protect us and our children from the impacts of climate change,” said in an online note. “We will have sample questions that we will send everyone who RSVPs.”

Indivisible’s Facebook event page says in part: “If you’re outside district 50, we still need you! Come support your fellow resistance members by rallying outside with us to show that #DuncanIsFlunkin.”

How the Town Hall came about is stuff of legend — and dispute.

Progressive groups cheered Harrison’s Feb. 24 email announcing the event, which they contend was a direct result of “Resist Trump Tuesday” rallies outside and meetings inside Hunter offices in El Cajon. Those led to phone calls, newspaper letters, social media demands and a state Route 67 overpass demonstration Feb. 23. (Pressure also came from a change.org petition by Brina Bujkovsky of San Marcos with 954 supporters.)

Harrison, the Hunter aide, says a February Town Hall, during the traditional “district work period,” was never in the cards.

“His schedule was already booked — very far in advance,” Harrison said Wednesday in a phone interview.

In fact, he contends, the timeline for a Hunter Town Hall was moved up — but couldn’t be nailed down until a venue was secured.

“The only thing worse than not having a Town Hall is to cancel a Town Hall, right?” he said.

Along with others, Ludwig says Hunter picked Ramona because “Mainstage is where the Tea Party in Ramona holds its meetings. And it’s owned by a Tea Party member.”

“The relationship [of the Days] to Ramona TEA’d is one of landlord and tenant,” he said. “We rent the venue from them as would anyone else.”

In January 2010, however, Ramona TEA’d Chairman Jim Tapscott wrote in the Ramona Sentinel that his group, “together with Citizens for Private Property Rights, will present a series of town hall meetings … hosted by Orrin and Cheryl Day and held at the Ramona Mainstage Theater, 626 Main St.”

The Days and Mainstage didn’t respond to requests for comment, but Fontana said Ramona TEA’d “was not part of that [site-selection] decision process.”

Harrison called Mainstage “the largest venue available in Ramona” and acknowledged complaints that “we didn’t get a big enough place.” 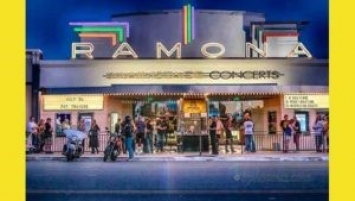 “But you know there was a lot of calls for a meeting sooner rather than later, and that’s the largest venue available in Ramona,” he repeated.

Harrison said some people suggested school venues, but “we … talked to the school district, and none of their facilities were available.”

But it wasn’t made available for the same reason Bernie Sanders wasn’t allowed to hold a rally at Ramona High School’s football stadium, said a Ramona Unified district official.

“We try to stay out of anything that’s, you know, might be contentious,” according to the rep, who said the decision to bar the Town Hall was made by schools Superintendent Anne Staffieri.

Saturday’s event might reach many thousands, however, since TV cameras are expected, plus livestreams via social media. RamonaTownRadio.com will air the Town Hall live, says Eric Vellone, founder and president of the Internet-only station.

“I have a good friend named Woody Kirkman who’s the president over at Ramona Town Hall,” Vellone said Wednesday. “He contacted me yesterday and asked me if I would like to.” Listeners can “download our mobile app by looking up Ramona Town Radio in any app store.”

How will the Town Hall be conducted?

Harrison said no moderator will be used — just the fifth-term congressman and early supporter of Donald Trump “having a conversation. … He’s just going to answer questions.”

Hunter’s staff plans to use question cards collected from the audience in advance, he said.

Whether a microphone is used depends on circumstances, he said.

“We want to make sure that everyone gets to be heard,” said Harrison, who also worked for the current congressman’s father. “There’s no way to get to everybody’s questions, so we want people to feel like if they want to leave questions behind with the staff, we make sure they get answered.”

Ludwig says Indivisible is “preparing for everything.” And because so few people can get in, they’ll hold a concurrent rally a few blocks away at Collier County Park, “and we have a permit.”

She expects only the first 300 to 350 people will find seats for the event advertised to last 90 minutes.

Said Harrison: “We’ll probably open the doors around 9:15 so people have plenty of time to get in, and obviously when they reach capacity they’ll have to stop.”

The 50th District has 330,395 registered voters — 43 percent Republican to 27 percent Democrat — and takes in large sections of East and North County stretching close to the Salton Sea. Hunter, the 40-year-old son of long-tenured Rep. Duncan L. Hunter, has won every election handily.

Why did Ludwig push for a Town Hall?

She says she wants Hunter to answer for “ethical problems” related to his much-maligned campaign spending for personal needs. “I’d also like him to answer if he feels it’s OK to repeal the [Affordable Care Act] without a replacement.”

Ludwig also wants Hunter to join fellow GOP Rep. Darrell Issa in calling for a special investigator into Russia’s ties with the administration.

Fontana wants Hunter to address issues of interest to the Tea Party, which he said generally supports President Trump’s agenda.

“We are constitutional conservatives in favor of limited government, secure borders, fiscal responsibility, etc.,” Fontana said via email. “Ramona TEA’d is no different. That said, we do not tell our ‘members’ how to think or what questions to ask.”

Amid vows of courtesy on all sides, security is planned, Harrison said — with sheriff’s patrols outside and private security inside, hired by Mainstage.

Indivisible’s Ludwig said: “I can’t speak for everyone, but as an organization, we’re trying very hard to make sure that everything remains civil. At the end of the day, District 50 is about to show up in Ramona.”

Hunter’s website doesn’t mention the Town Hall, but Harrison said he’s very confident the word is out. Besides email to interested groups, Town Hall notices are posted on windows at their El Cajon and Temecula offices.

“Our D.C. office was supposed to put it up on the website, so I’ll check with them and find out why that hasn’t been done,” he said.

And the longtime aide to both Hunters promised. “We’re going to have more Town Halls, so by all means this isn’t going to be the only one.”

Great to have people who respect the Constitution and our individual rights in charge. The Che tee shirt wearing crew have no respect for our Freedoms..They want total control..It's Saul Alinsky Rules for Radicals or else they'll riot and sabotage Trumps Agenda for job growth and the ACA replacement that people can afford and need. Single payer Govt control is a failure.
This man has never cared or helped constituents requesting assistance. Had to ask, and receive help from Rep Anderson. He's been too long on payroll. He needs voting out of office and/or term limints