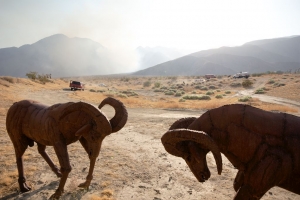 Ortiz, a Native American, was taken into custody today and booked into the Vista Detention facility. Durbin, who is white, was already in the Vista detention facility on a car theft charge, according to Sheriff records.

Cal-Fire has not yet released details on the individuals or what motive may have been behid their actions in setting the Eagle Fire, which burned 14,100 acres and cost an estimated $15.6million in fire suppression costs.