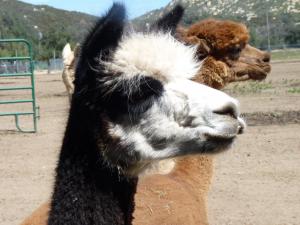 October 10, 2015 (Descanso) – Weavers spun yarn, kids petted alpacas with names like Cinnamon and Swirl, while guests of all ages learned about the care and feeding of these Andean  denizens during National Alpaca Farm Days.

The event was held locally at Atlas Alpacas in Descanso, a ranch owned by Amay Alyeshmerni and her partner, David Kabbai.  The venture recently merged with Hazard Alpacas of Jamul to form Alpacas of San Diego.

“This isn’t about selling alpacas. It’s about teaching people,” says Kabbai, adding that he loves the experience.  “Kids come up here and have no idea where their sweaters are coming from.” 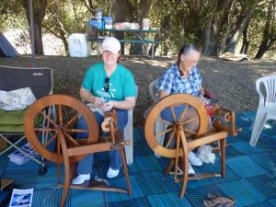 A single alpaca can yield 5 to 15 pounds of fleece each year, which sells for $8 to $10 an ounce.  Spinners, weavers and knitters then transform the fleece into wool and ultimately, luxurious goods ranging from scarves and sweaters to blankets.

Karalyn Raimy and others with Margaret’s Spinners were on hand to demonstrate their skills—learned through a Grossmont High School District adult education class started 14 years ago.  They meet on Wednesday mornings and e 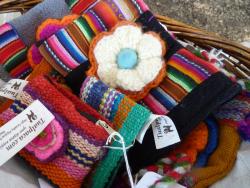 “There is an army of weavers out there looking for natural fiber,” says Alyeshmerni, adding that fiber festivals are also in vogue.  Alpaca fiber is in high demand due not only to its quality, but also because it is hypo-allergenic and contains no lanolin, unlike sheep’s wool.   The finest fleece is used for items such as blankets and throws, while seconds may become socks and thirds –fleece from the neck and legs –is coarser and used in rugs.

The ranch is located at 3,500 feet in elevation. Alpacas originated high in the Andes mountain range in South America, where t 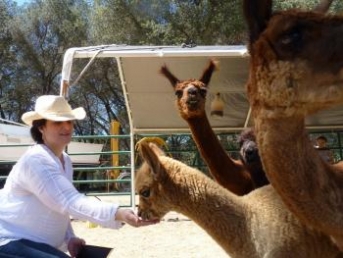 hey provided fiber, fuel and transportation for the ancient Incas. Alpaca fleece has long been prized for its softness and durability, worn by royalty and society’s elite.

Kabbai set out to start a ranch a decade ago.  He soon found that alpacas are low maintenance, needing sheering just once a year.  Unlike some livestock, don’t have to be killed to yield a profit.  His ranch now sells fleece as well as alpaca pellets as fertilizer.

Most alpaca ranchers don’t earn a lot – so don’t expect to retire off your earnings, Alyeshmerni cautions.   The real money to be made is in successful breeding of alpacas.

“We are aiming to be a premier breeder,” says Alyeshmerni.  That means traveling to breed alpacas, which may be sold as pets, breeding stock, or as companion animals.  Horse owners have found that alpacas make good companions for lone horses and cost only about $350 to $500 a year to feed.

All of the alpacas in the U.S. currently originated from two breeders who brought the first alpacas to the U.S. from South America back in the early ‘90s.  Today there are about 100,000 alpacas in the U.S.  Breeders work to enhance characteristics such as color (alpacas range f 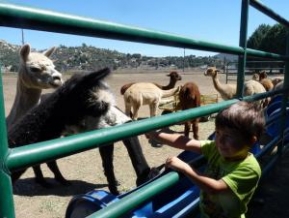 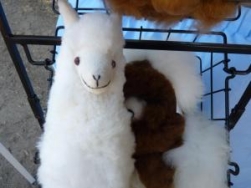 all percentage should be bred, choosing the best characteristics to carry forward to future generations, Alyeshmerni  says.  Breeders can also get stud fees for breeding alpacas, ranging from $1,000 to $2,000 on average.

Alpacas are intelligent and at times, frisky.  “They have a witching hour around 7 p.m. when they run and chase each other,” Alyeshmerni says, as a herd of alpacas lopes across a field, heads held high.  Their large eyes and soulful expressions have an undeniable appeal, making it easy to understand the attraction of alpacas to would-be owners – or why they were once revered in the ancient Incan culture.