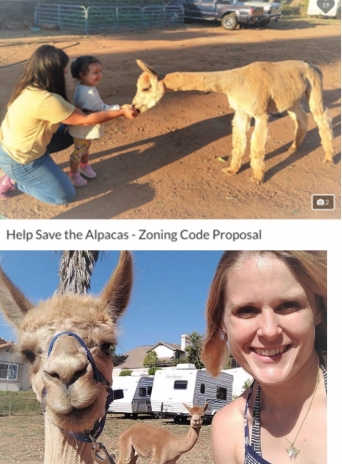 July 12, 2019 (Escondido) – The city of Escondido wants to evict Bubba and Einstein, a pair of alpacas owned by Kelly Thor and Ryan Jimenez. The couple fulfilled their dream of buying a home where they could raise animals in 2017 and were surprised to learn that the city regulates alpacas as cattle for purposes of zoning.

“Alpacas are quiet, gentle, innocuous animals,” the couple writes on a Go Fund Me page that they have set up to raise part of the estimated $3,695 needed to challenge the city’s ordinance.

One person has filed a noise complaint with the city, 10 News reports, but other neighbors say they have not had any problems with noise from the alpacas.

The owners argue that alpacas should instead be regulated like miniature horses, which they say are closer to alpacas in use, characteristics and land requirements.

The website AlpacaInfo.com states that alpacas are generally very quiet, cleaner than most livestock, and are “safe and pleasant” to have around since they don’t bite and have a docile temperament.  The average alpaca weighs 100 to 200 pounds is prized for its silky fleece.

The campaign launched by Thor and Jimenez to fund their challenge to the city’s ordinance is online at https://www.gofundme.com/help-save-the-alpacas-zoning-code-change