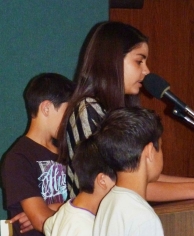 “Dr. Glover and I strongly believe it is essential for our districts to work collaboratively to forge positive relationships dedicated to improving student outcomes and preparing all students to achieve their potential for success in life, career and as contributing members of society” said Dr. Newman, AUSD Superintendent.

Dr. Glover, Grossmont Superintendent stated, “This settlement is yet another sign of improved relations between our districts and another example of the two districts’ dedication and focus on serving our East County students, families and communities.”

ATBA member Sal Casamassima shared, “The ATBA recognizes the court has ruled and the parties involved have forged a settlement agreement. The new, collaborative efforts between the two districts is welcomed news.”

The press release states that the GUHSD “remains committed to building a new high school in Alpine when the conditions are appropriate for doing so,” and that all parties will “endeavor to work together in a positive spirit of cooperation focused on the best interests of the entire districts, tis students and their families, teachers and staff and all communities served.”

The Alpine groups, faced with hefty legal bills, had little choice but to cut their losses in the settlement, after both a trial and appellate court issued ruling in contrast to an earlier San Diego County Grand Jury report which excoriated the GUHSD for twice enticing voters to support bond measures Prop U and H in part to build the Alpine High School, then failing to do so. The Grand Jury report was titled “Fool Us Once, Fool Us Twice?”

The Grand Jury admonished Grossmont to either set a clear time table to build the school, or turnover money to the Alpine district so that it could do so, an action that would have required unification to expand the AUSD to include high schools, not just elementary and middle schools. But the State recently turned down the AUSD’s unification proposal, which was backed by the County Board of Education, dashing seemingly all hopes of getting a high school built in Alpine, at least as long as the current board remains in power.

George Barnett, a plaintiff in the proceedings and final settlement, told ECM he is “personally pleased” that the districts and superintendents “pledge to work together in that Alpine is an important feeder to Grossmont, and the education of Alpine kids is also a priority of Grossmont.”

Some Alpine residents who have waged a decades-long battle  to bring a high school to Alpine have voiced disappointment at the outcome, however, and voice skepticism over the district’s motives.

After the San Diego Union-Tribune wrote an article on the settlement, Scott Alevy, a Blossom Valley resident and former East County Chamber of Commerce President, posted on SDUT reporter Karen Pearlman’s Facebook page, “I know that I am not the only disgruntled Blossom Valley and Alpine resident who feels we were `sold a bill of goods.’

He noted that residents voted for the bonds “with the understanding that the children in our neighborhood would benefit from a new and closer high school and that home values would rise and our neighborhood would be enhanced with a new high school,” then asked, “Will we realize any benefit for the money that we have paid into the bond funds without any benefit now or ever?”

Former GUHSD board member Priscilla Schreiber, the sole supporter of the Alpine High School through her years on the board before she was forced out through redistricting, replied, “The only benefit will be for the students from Alpine and Blossom Valley who will attend a newly modernized GUHSD high school down the hill. No increased property values or growth will be realized in those communities without the promised high school and because of their own conditions placed on the school and fought for in the courts, they can’t build the school for years, if ever.”

But she added, “Elections are just around the corner for the three who have denied you all a return on your investment,” she said of the three incumbent board members still in office (Jim Kelly, Gary Woods and Robert Shield.)

It’s unclear yet who if anyone will run to challenge the incumbents and whether any challengers would support committing to build an Alpine High School.  But it’s clear that if  pro-Alpine high school candidates emerge, many Alpine residents will likely be behind them.

Jennifer Mowery Doucet made this observation on Facebook:  “Sadly the town of Alpine must feel like Charlie Brown when Lucy (the GUHSD board) continuously pulls the football out from him as he’s putting his `all’ into that big kick. We’ve worked so hard and just ended up flat on our backs with no points scored! Fool us once, fool us twice,” she concluded, adding, “Remember to vote.”