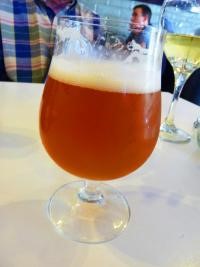 November 11, 2014 (Alpine)—The Alpine Beer Company has long been popular among East County beer lovers. This week, the company announced it has been acquired by Green Flash.

Alpine Beer was started in 1992 by McIlhenney, a former firefighter, and his wife, Val, who also run a pub next door. They say that their brand will remain--and they will still be in full control of production.

The little brewery has been drawing big attention, with two of its IPAs scored among the world’s best 250 years in a poll conducted by the website Beer Advocate.  Alpine Beer’s biggest problem was an inability to keep up with demand. Merging with the giant Green Flash will allow for expanded capacity to produce specialty beers that that considerable time and resources to brew.

The deal is expected to allow Alpine Beer to double its production from 1,500 to 3,000 barrels a year, UT San Diego reports.

Next up, Alpine Beer is preparing to open up a larger tasting room near its brewery in Alpine and hopes to secure property for a larger brewing facility, too.  That’s cheery news for beer lovers in East County.