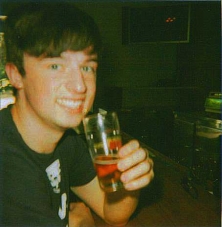 August 3, 2009 (Alpine) -- I found Pure Hoppiness a month ago, largely by accident. I strolled into the local watering hole and attempted to order my usual beer. I was informed by the bartender that they had just run out. After regaining my composure, and wiping the tears from my eyes, I settled on Pure Hoppiness, a double India Pale Ale brewed by the Alpine Beer Company.

I was so taken with the hoppy, yet smooth taste of Pure Hoppiness that I made sure to look up Alpine Beer Company after my walk home. Upon visiting their website, I was astonished to discover that were based in Alpine, California.

Despite being past the apex of my collegiate career, critical thinking sometimes escapes me. It was at this point that I had a stroke of genius: Alpine is in East County, I am an intern for East County Magazine, and I really like beer. I decided that the next logical step was heading east and interviewing the owner of Alpine Beer Company, Pat McIlhenney.

I drove out to Alpine on a Saturday with my friend, Mike Fogarty. We found a parking place right outside and, not knowing what to expect, walked through the front door. Upon entering, I awkwardly looked around, realizing that we had arrived twenty minutes before the time Pat and I agreed to meet.

“I’m looking for Pat!” I blurted out, turning the heads of all of the employees in the building. I was informed that he was around the property somewhere. I waited for a few minutes and was told to go outside, walk down the hall, and go through a white screen door at the other end of the hall. Mike and I did this, noticing that the room that we were now in appeared to be a pub in the process of being constructed. 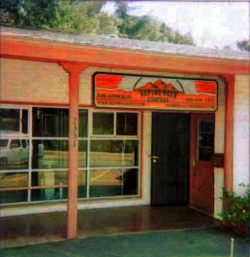 We entered the room and were instantly greeted by a swirling blend of industrial fans and Pink Floyd blasting out of the speakers. Behind the bar, mending the taps, stood a man clad in a baseball cap and a t-shirt. His manner of dress and mustache fit perfectly with the brewery owner image that I had in my mind. We introduced ourselves to each other, as Mike and I sat on the stools at the bar opposite from Pat. He immediately struck me as being a friendly, laid-back person, and I knew my interview with him was going to be enjoyable.

I began the interview by asking Pat a bit about his background as a brewer.

“Brewing was until just recently more of a hobby job as opposed to a serious full-time career type job, because I had a full-time career as a fireman, which I just retired from,” Pat responded. I smiled as I realized that the baseball hat, t-shirt, and mustache look could just as equally fit a brewer as it could a firefighter.

“Brewing is a passion that is more than just a hobby. I take it very seriously, and I started home brewing a long time ago with not just the intent of making beer for myself, but to open a brewery someday,” Pat told me, before outlining the steps he took prior to opening Alpine Beer Company. He took a job at a home brew supply store, signed up for seminars about opening a brewery, enrolled in extension classes through U.C. Davis while on vacation from the fire department, and volunteered at a local brewery.

Pat also told me that he improved his recipes by entering his beers in amateur competitions. He would pay attention to the judges’ notes and then make alterations to his recipes accordingly.

“I was developing recipes that were tried and true in the home brew world that actually turned out to be very good in the professional brewing world as well,” Pat said.

The history section of the Alpine Beer Company’s website mentions that Pat opened the brewery in the middle of his home town in the nick of time, since he was growing tired of commuting from Alpine to the AleSmith Brewing Company in Miramar, where he was making his own beer at the time. I asked Pat if there were any other advantages to operating a brewery in Alpine besides the commute improvement.

“I like the home town aspect of being in a small town and being a small brewery. That is what we cater to…the immediate area,” Pat responded. One of the ways he caters to the immediate area is through the sale of growlers, a glass jug that is filled with beer on-site for the purpose of being enjoyed at home. Growlers provide the environmental benefit of being in a reusable container, he explained. “I love Alpine. I found this place while I was in high school and I’m still loving it--I just love the community,” Pat added.

After he had finished answering the last question, I asked him to name his favorite Alpine beer. Upon seeing his exasperated facial expression, I realized that this was a poorly planned question. Pat told me that his preferences change seasonally, but then he gave me a great response: “The one in front of me.” He told me that although it seems that the owner of a brewery would get to drink all the time, he mainly just tastes his beers during the brewing process, taking only a sip or two.

I then asked Pat what sets Alpine Beer Company apart from other breweries. His response was quite straightforward: “Well, I know our philosophy: beer. The beer should be the focus. We’re not an ad campaign. We find advertising to be detrimental to our operation. I am not interested in saving money because I can buy this ingredient cheaper. If it’s not better, I have no interest in it whatsoever. I let the beer speak for itself.”

Curious about the partially constructed building we were in, I decided to ask Pat about it.

“It will be a pub that will also serve a bit of food,” he replied. “It is too small, you can see the entire kitchen--it fits the cook and that’s it. We don’t have a lot of room to make a lot of food, but we will focus on a good barbeque-themed menu, and this has a lot of history.” Pat then explained the history of the building. It was formerly a lunch diner with a daily lunch selection and a soda fountain.

While explaining the history of the building, Pat instructed me to remove the red cushion atop one of the barstools. On the underside of the cushion were several historic signatures of patrons of the lunch diner, covered up by more recent visitors.

“It’s just some history that is there that you can’t find any old place,” Pat added. He told me that he remembers hanging out at the lunch diner in high school. He did an impression of the owner, who evidently usually stood at the end of the counter, yelling, “Don’t eat your dessert before you’re done with your vegetables!” He said that he was going to try to have the pub remain faithful to the home-style feeling that the diner had.

Finally, I asked Pat about what the future has in store for Alpine Beer Company. “The future is we’ll never get bigger than we can maintain positive control on the beer.”

At this point, Pat poured Mike and I a sample of one of his beers. The one he chose was called Bad Boy, which he referred to as being the “other double IPA,” the first being Pure Hoppiness. Bad Boy is very hoppy in true double IPA fashion, but is also very smooth, leaving a remarkably pleasant aftertaste.

The next beer that Mike sampled was Chez Monmee (pronounced Shame on Me). This beer is in the style of a Belgian Lambic, which is a style of beer characterized by fermentation from wild yeasts found in Belgium, giving the beer a sour taste. Pat explained that it is not legal in the United States to ferment beer with wild yeast as Belgium does, so it is attempted here under more controlled conditions, unfortunately not yielding the same effect. Mike especially liked Chez Monmee, which he described as being “very flavorful, strong and with a sour bite to it.”

Once we had finished sampling beers, we left the partially constructed pub for the brewery so we could each buy a growler. So impressed by his recent exposure, Mike ordered the Bad Boy double IPA. I ordered my old favorite: Pure Hoppiness.

After my own excellent experience there and because of the delicious beers and friendly staff, I would highly recommend visiting this brewery. I am certainly planning to return after their pub opens.

Alpine Beer Company is located at 2351 Alpine Boulevard in Alpine. Their public hours are from 12:00 PM to 6:00 PM, Tuesday through Saturday. They can be found on the Internet at http://www.alpinebeerco.com/.