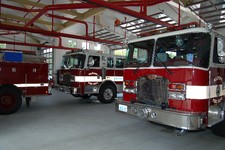 March 1, 2014 (Alpine)-- Fire benefit fees will increase by 1.1 percent this year in Alpine as a result of a 3-2 vote by the Alpine Fire Protection District Board.  The increase would be about 71 cents a year for the average single-family dwelling and $1.80 annually for the average business to a total of $65.59 per home and $164 per business, according to district staff. Board members made the decision after their annual benefit fee review at their Feb. 18 meeting, when they also approved buying a new fire pumper with the help of a $127,802 Indian Gaming Local Community Benefit Grant.

District voters approved the benefit fee in 2001, when it was $60 a year for a typical single-family dwelling.  The board can raise the fee annually, depending on the previous year's national Consumer Price Index.

All of the benefit fee money goes to the Alpine Fire Protection District, unlike the state's new State Responsibility Area fire prevention benefit fees imposed in 2011. The Alpine fire district doesn't get any of that money.

"I think we're getting close to not being in a fiscal emergency anymore," said Board Member Jim Mann who voted with Board President Pat Price against an increase. "I think the tax payers need a break every once in awhile."

As far as the new fire engine, Fire Chief Bill Paskle said the new pumper will cost $558,316.80. The Indian Gaming grant will pay part of that the rest of the money will come from the fire district's accrued apparatus replacement funds, he said.

Paskle said the district is saving a considerable amount of money by "piggy backing" on a Los Angeles city contract with KME Fire Apparatus in Nesquehoning, Penn.

"We are very thankful to the IGLCBG for awarding us the grant," he said.  Funded by local Indian casinos, the Indian Gaming benefit grants are available to the County of San Diego, cities and special districts to help alleviate the impact from casinos.

"The new engine is going to replace our front line pumper," Paskle said. "We do that about every 10 years, which is typical for fire departments. It will take about a year to (build) the new pumper.  Meanwhile the board will decide what to do with the old reserve engine."