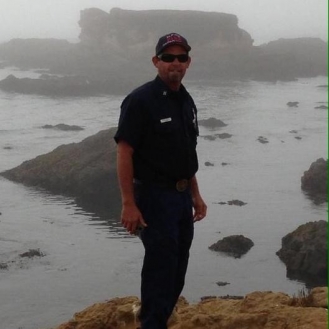 July 8, 2018 (Alpine) — An Alpine Fire Department crew, the first to arrive at the West Fire in Alpine on Friday, swiftly found themselves surrounded by flames and narrowly managed to escape.  The scorching flames were so hot that they melted tires on the fire engine, 10 news reports.

Alpine Fire Captain Mike Vacio, also an elected member of the San Miguel Fire Protection District board, had stepped in front of the fire engine to assess the situation, when he realized his crew was in danger.  He suffered blistering burns on his neck and ear. Even more dangerous, he had heat exhaustion, smoke inhalation and dehydration amid 110-degree heat.

Vacio managed to call his wife from the ambulance on the way to the hospital, where emergency medical personnel cooled down his body before organ damaged could occur.

“The fire service family is very close, so I had a lot of support from every agency in this district,” says Capt. Vacio, who hopes his doctor will clear him to return to his firefighting job as soon as Friday.

Vacio, a 27-year firefighting veteran, was elected to the San Miguel Fire Board in 2014, where he cast a decisive vote to return the district to local control.

This is one example of what our dedicated first responders put themselves through when protecting our homes and lives. We are grateful for what all of you do.