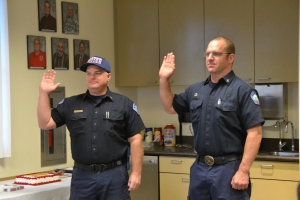 Photo:  Division Chief Brian Boggeln and Captain Greg O’Gorman take the oath and are sworn in to their positions.

November 1, 2018 (Alpine) -- The Alpine Fire Protection District (AFPD) recently announced the promotions of Brian Boggeln and Greg O’Gorman.  The promotions were effective on October 1st.  Both firefighters participated in a badge pinning ceremony where they were ‘pinned’ by their wives and recognized for their accomplishments by the AFPD Board of Directors at the October 16th Board meeting. 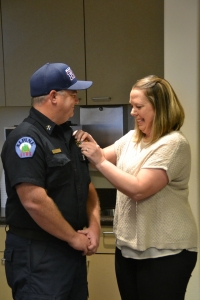 Brian Boggeln has been promoted to Division Chief.  As Division Chief he will oversee the Operations Division of the District.  He will oversee all aspects of the firefighters and when assigned to incidents will assume command of major incidents.  Division Chief Boggeln was hired by the AFPD in 1997 as a cadet firefighter.  He was promoted to Firefighter Paramedic in August 1999.  He was one of the first Paramedics when the District started its Paramedic program in 1999.  In September 2004 Boggeln was promoted to Fire Captain.  As Captain he had many duties, including overseeing training, Emergency Medical Services and technology.  He was very active in the Alpine Firefighters Association, having recently served as President.  Chief Boggeln and his wife Dottie reside in Alpine with their two sons. 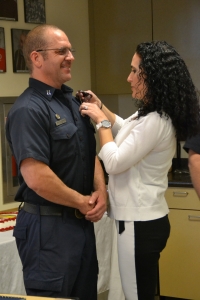 Photo, left:  Captain O’Gorman is “pinned” by his wife Racheal

Greg O’Gorman was recently promoted to Fire Captain.  As a Fire Captain O’Gorman will lead the crew of four firefighters working on the fire engine.  O’Gorman was hired by the AFPD in October 2007 as a Firefighter Paramedic.  He has taken on many responsibilities in the District, including station supplies, station landscaping and maintenance on firefighter breathing apparatus.  He has also served the Alpine Firefighters Association and currently serves as Vice President.  Captain O’Gorman and his wife Racheal live in Alpine with their daughter and three sons.