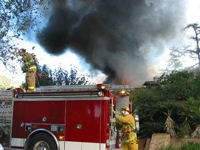 January 2, 2012 (Alpine)--The Alpine Fire Protection District has approved pension changes with the Alpine Fire Fighters Association. After months of negotiations, at a Board meeting on December 20, 2011 both sides agreed to a contract extension that makes changes to the pensions of current and future Firefighters employed with the District. All employees of the Alpine Fire District are members of the CalPERS retirement system.

Also Alpine firefighters will begin paying the employee share of their pension cost. Currently the District pays the employee and employer portions of thepension cost. The employee share is an amount equal to 9% of the employee's base salary and the employer portion is equal to 24.112%. Details of the approved agreement call for a gradual phasing out of the 9%, with the employees picking up 3% each year for the next 3 years beginning in FY 12/13. When fully implemented, this will save the District over $108,000 per year.
In addition the firefighters will receive a salary increase of 1.5% each year for the next three fiscal years. The District also restructured the Health benefits package for safety personnel. That change will save the District about $8,000 per year.
On June 23, 2011, by a 3-1 vote the Board of Directors of the Alpine Fire Protection District declared a fiscal emergency based on declining revenue, pay-off of the CalPERS risk pool side funds and the continuing State of California budget crisis. The District receives the majority of its funding from property tax revenues. Since 2008 the District has experienced a 13% reduction in property tax revenue.