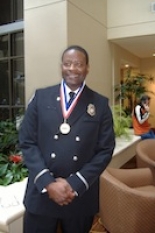 May 28, 2013 (Alpine)--The Alpine Fire Protection District will present a community event on May 30 from 6-8;30 p.m. at the Alpine Elementary School auditorium, 1850 Alpine Blvd. in Alpine.  The event will feature Ennis Jackson, an award-winning speaker who has won the National Star of Life for his efforts to alert and educate the community which includes high schools, colleges and business on the subject of destructive decisions and life saving CPR techniques. These destructive decisions include underage drinking, the use of mind-altering drugs and texting while occupied, and most importantly, the value of family. Jackson is a paramedic stationed out of Alpine Fire Station 17.

After completing Surgical Technology training in Dallas Texas, Jackson enlisted in the United States Navy where he served ten years as a Navy Corpsmen. He spent most of that time attached with the United States Marine Corps. He graduated from Palomar College Paramedic School after getting out of the Navy in San Diego, California. He achieved his Firefighter 1 while working as a Firefighter in the city of Del Mar, California. He has been employed by AMR San Diego for the last 25 years. He holds a Bachelors of Science Degree in Business Administration and a Masters Degree in Business Management.

“His speaking ability exceeds that of excellence based on the numerous letters from students, teachers and business people who have had the pleasure of attending his lecture. His compassion for people and life itself is a testament to the many awards he has received. Some of those awards include, The Community Service Achievement Award, Paramedic of the Year Award in 2004 and the State of California Star of Life Award in 2006,” said Fire Chief Bill Paskle. Jackson recently received the national Star of Life Award, in Washington DC for his unending effort and continuous appearances at high schools, colleges and businesses around San Diego, Los Angeles and Riverside Counties to educate teenagers and the public on the dangers, consequences and family impacts of making irreversibly destructive decisions. This is the highest and most prestigious award that a paramedic or EMT can achieve in the United States. He is also nominated for the CNN Hero’s award for 2013.

Jackson’s lecture is presented by PowerPoint that includes music, poems, videos and true stories from his tenure as a military and private medic. It is highly recommended that teenagers as well as adults and parents attend. This presentation is graphic so students under the 8th grade should not attend.  The event will also feature a hands-on CPR demonstration.