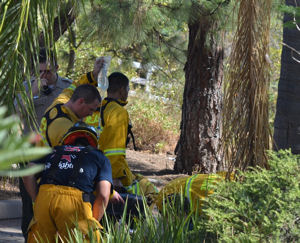 October 2, 2012 (Alpine)-- An Alpine firefighter was overcome by heat at a house fire on Via Dieguenos Road.  According to Battalion Chief Brad Rushing, Alpine Fire Department, the firefighter was overcome partly due to the triple digit high temperatures that prevail in the area. He was taken care of by field medics and transported in stable condition as a precaution by a Viejas medic unit to the hospital. 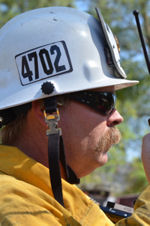 The brush involvement in this fire was contained at a quarter of a mile, and the damage to the home was mostly contained in the attic.

The Lennon family, who live there, fortunately have insurance. And Katherine Lennon, one of the two daughters, told ECM that she “felt bad for the firefighter who was injured.”

Units came from Apline, CAL-Fire, Viejas and the Forest Service. According to Chief Rushing he had a total of 8 engines, 4 more were en-route, 1 truck company, 2 Chiefs and 1 medic unit.

The cause is still under investigation.