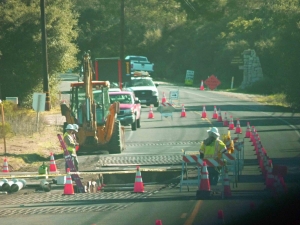 March 2, 2011 (Alpine) --Announcing closure yesterday of the Vine Restaurant and Wine Bar, one of Alpine’s most popular eating establishiments, owner Michele Little faulted construction of the high-voltage Sunrise Powerlink line as a major factor in her decision to go dark.

Already struggling in a tough economy since opening four years ago, Little noted, “Our lunchtime crowd had just started to get busy and we were just beginning to break even until the construction work began down Alpine Blvd. Business seemed to be cut in half as soon as it started.”

Little urged residents across East County to support Alpine’s remaining merchants. “They are you neighbors and I am positive they could really use your support,” she said.

On February 10, East County Magazine’s editor drove along Alpine Blvd. and encountered no less than seven flagmen delaying traffic for installation of massive underground Powerlink vaults. It took 35 minutes to traverse a couple of miles that can normally be done in around five minutes.

In planning sessions with the community prior to construction commencing, SDG&E had pledged to keep delays to a minimum.

Asked about the traffic problem, SDG&E spokesperson Jennifer Ramp said the contractor had been gi 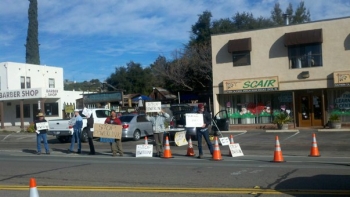 ven flexibilities to schedule work in order to meet a planned completion deadline by mid-2012.

Ramp also said that “the traffic control teams and flagmen on the Sunrise Powerlink adhere to rigorous safety standards and continue to focus on their task of keeping people safe on Alpine Blvd.”

Elsewhere in East County, however, some residents have complained of safety issues related to Powerlink construction. Janis Shackelford, in a post on the Blossom Valley Network discussion form, complained that “a gaping pit” was “left along the roadway for weeks back in November” on Blossom Valley Road. “The County Public Works staff were appalled when informed of this significant hazard that had been left in the public right-of-way,” she said, adding that SDG&E eventually put up barricades and completed the new electrical vault.

Greg Fox, chairman of the Alpine Planning Group and President of Alpine Business Networking Association, said SDG&E met with planning group members on January 27th and put systems in place that are supposed to prevent total delays of more than 15 minutes. “I drove up the Boulevard twice today and both times was able to get through in a few minutes,” he said. He added that SDG&E has paid to publish a directory of Alpine businesses and made other efforts to lessen impacts of the year-and-a-half construction project.

But problems remain. “I think it’s been extremely difficult for a lot of businesses,” Fox acknowledged. For example, he said in an interview yesterday, “Today I had to get in front of Donato’s and ask a contractor to move their trucks which were basically blocking the restaurant’s entrances…I would say that a majority of businesses have been affected.” He cited Submarina and Alpine Beer Company as two that have been particularly impacted by blocked access.

Fox added that the bad economy and high gas prices—which make it harder for urban residents to drive to Alpine—have also taken a toll on local businesses. “It’s not all SDG&E’s fault,” he observed, adding that the utility company and its parent, Sempra Energy, have invested $5 million to improve the street including landscape upgrades long wanted by many area residents. “They’re going to put our street back better than it was,” he said, “If we can all just get through this.”

But Little contends SDG&E is not doing enough to help offset the lost business to merchants.

"I was just talking to the people at The Alpine Taco Shop and they told me that they had filed a claim," she said.  "SDGE told them that they would just have the guys eat there more often."

Little said she and her husband went to SDG&E's work yard when construction began late last year and took sandwiches, sodas, and cookies.  "They turned us away and said we could not come there and sell stuff without permission so I e-mailed the head guy and he never returned my e-mail." she said.  "We would have been happy to deliver to them everyday and just that little bit extra would have helped our business so much."

Today, Little says she learned that the nursery next door to the Vine, is going out of business, too.

"I know a lot of other businesses are hurting," she said, laying the blame on Powerlink.  "So sad for Alpine. I'm just the first casualty but I'm sure there will be many more to follow." 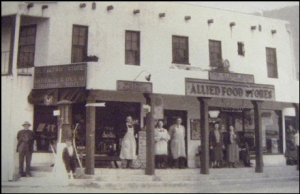 Alpine may soon lose a building that some feel has strong historical significance due in part to Powerlink. The former Alpine Store, a pueblo-style adobe that also served as Alpine’s first post office, has roots that date back to the Civil War era in the 1860s when the town’s first store was built on the site.

Although the original building burned in a fire, a replica built in the 1930s has survived nearly 80 years with little exterior change; it currently houses a bicycle shop and barber shop. (The building is also visible in the photo at the top of this site, behind the protesters.)

The Alpine Historical Society’s president has said the building “should be preserved” as the only pueblo adobe commercial structure left in Alpine.

But Brian Garmo of GC Properties has submitted a proposal to tear down the building, which was never officially designated as a historic landmark. “ “SDG&E is coming in and taking all of our parking spaces away permanently,” he told East County Magazine. People have been using the front for parking for 100 years or so.”

GC Properties wants to build a larger commercial project on the property, but can’t do so without first solving the parking problem. “We have to create spaces for our tenants within a reasonable location of the building,” said Garmo, who is adamant that there is no way to build the project without razing the building. He is willing, however, to speak with anyone who has land and may be willing to have the building moved to a new site in order to save it—if moving is even feasible, a feat that is questionable since the structure has a basement and is not built on a foundation. The project is currently in the early planning phase and a historic site review has been requested by the County Department of Planning and Land Use.

Earlier this week,  protesters led by Citizens Oversight lined Alpine Blvd.  They argue that construction of Powerlink should not move forward, disrupting life in Alpine and other areas, while lawsuits remain in court that could potentially stop the project.

On March 7th, the federal court in downtown San Diego will be hearing a lawsuit filed by three local organizations: the Protect Our Communities Foundation, Backcountry Against Dumps and East County Community Action Coalition. A large protest rally led by Supervisor Dianne Jacob is planned outside SDG&E headquarters at 101 Ash Street at 12:30 p.m., followed by a march to the courthouse steps.  For more details on the lawsuit and rally, click here. For SDG&E's information site on its Powerlink project, see www.sunrisepowerlink.com. 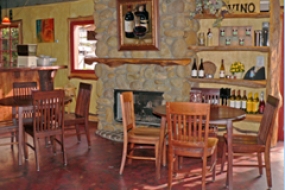 Meanwhile, for business owners like Michele Little and her husband, any reprieve will come too late to save her rustic log-walled restaurant, a place that exuded charm complete with a tree growing through its roof behind the smoothie bar. The Vine was once the site of an East County Magazine “On the road with the East County Eater” event, and a favorite of many East County residents.

Residents reacted to news of the Vine’s closure with dismay and in some cases, outrage in the Alpine Community Network, an online discussion forum for the community.

“So again, we lose another business in Alpine,” posted Pat Davis, who blamed the demise on Powerlink and government entities at all levels that failed to respect the hundreds of Alpine residents who have overwhelmingly opposed the project in numerous public meetings. “When will we recognize that an action taken by government (local or national) WITHOUT the support of those it is supposed to represent has consequences?” she asked.