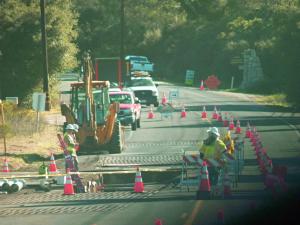 October 3, 2012 (Alpine)—The Alpine Planning Group will hold a special meeting on Monday, October 8 at 5:30 p.m. in the Alpine Community Center, 1830 Alpine Boulevard.  County of San Diego representative Michael Long will be making a presentation on why the County seeks to repave Alpine Boulevard between Tavern and South Grade Roads now rather than later.  Drainage issues will also be discussed.

“Alpine Boulevard will be torn up again, by the County, to an even greater degree than Sunrise Powerlink,” says planner Lou Russo, who urges the public to attend.  “There are options as to when and input is needed.”

Alpine merchants have already suffered from the impacts of Sunrise Powerlink Construction, which involved undergrounding the high-voltage line.  The extensive disruption was responsible, at least in part, for several businesses closing along Alpine Boulevard.  Some still in business have said that SG&E low-balled claims for damages.

In a letter to Supervisor Dianne Jacob, Russo asks for protections for local businesses including a presentation by County representatives on the claims process for business lost during construction.  “It would set the tone, up front, that Alpine businesses are not going to [be]  hurt, by their own government, without compensation.”