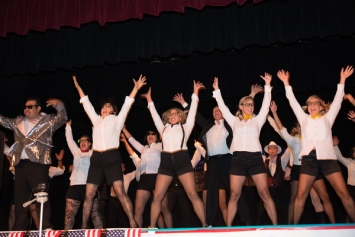 Alpine resident Carey Guthrie is directing and producing a talent show that will feature dancing and singing abilities of realtors from throughout San Diego County. Guthrie manages two real estate sales offices in La Mesa Village for Windermere Real Estate SoCal. She also serves as the 2015 president of the Pacific Southwest Association of Realtors (PSAR).

On Thursday, Sept. 24, PSAR will present a fun-filled evening of fashion, food and entertainment at its fourth annual Un-Fashion and Variety Show at the Scottish Rite Event Center, 1895 Camino del Rio South in Mission Valley. Proceeds will benefit the Military Warriors Support Foundation.

For the past three months, Guthrie said the cast of 45 PSAR members have been rehearsing three-or-four evenings per week for two-to-three hours each rehearsal. She said the rehearsals have consisted of watching YouTube videos of dance scenes and then mimicking the moves. “We are our own, self-taught chorographers,” she said. “I’m so grateful when our PSAR members say to me, `Sure, Carey, I’ll make a fool of myself for you, I’ll do it for you.’”

“A Hair Raising Musical Experience” is this year’s theme. The 10 individual numbers will spoof of some Hollywood’s most popular musicals and comedies, including “Grease,” “Pirates of the Caribbean,” “Hair,” “The Wizard of Oz,” “Nine To Five, “Remember the Titans,” “Cabaret” and “Beetlejuice.” There’s even a skit based on the “Magic Mike” movie series about construction workers who also work as male strippers.

In addition, a special, four-member live band, “The Summer of Love,” will perform songs from the 1960s and 1970s. The band is led by Dr. Clinton Friday, a chiropractor in Alpine. Also performing will be singer Stellita Porter.

The Military Warriors Support Foundation received a $10,000 donation as a result of the 2014 show.