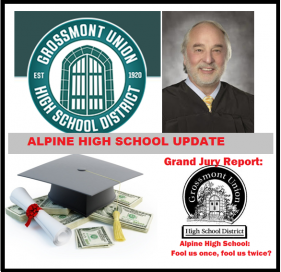 May 15, 2017 (Alpine) -- In the latest move to get Grossmont Unified High School District (GUHSD) to build a high school in Alpine, appeals have been filed in the Fourth Appellate Court in San Diego, with oral arguments expected late summer to early next year.

Alpine Union School District (AUSD) and Alpine Taxpayers for Bond Accountability (ATBA) are disputing a 2016 decision by a trial judge who found that Grossmont is not mandated to construct the Alpine school because an enrollment trigger of 23,245 students in the Grossmont district had not been reached “at the time of release of request for construction bids.”

AUSD is one of several K-8 districts that feed into GUHSD. The battle between the two districts is rooted in propositions H and U, passed in 2004 and 2008, respectively, which together bound GUHSD taxpayers to raise $417 million for a new high school in Alpine, plus upgrades to existing facilities within the Grossmont district. The disagreements are based on whether GUHSD promised Alpine the school, whether that promise was binding, whether the promise had to be kept during an economic downturn and whether bond funds can be set aside for Alpine if the school isn’t built.

This is the second round of appeals on this subject. The 2016 court proceedings followed a scathing grand jury report that implied GUHSD had “fooled” Alpine. It recommended the Grossmont district make it clear whether or not it was going to build the school. When Alpine taxpayers got no further satisfaction, they went to court. Judge Joel Pressman initially imposed a preliminary injunction that meant Grossmont would have to set aside $42 million for the Alpine school. He later dissolved that injunction. After an appeals court ruled that GUHSD had violated a promise made to Alpine, Pressman went ahead with the trial.

Judge Pressman, in his ruling, found that Prop. H funds were not sufficient to complete all projects, due to inflation of construction costs and underestimating of project costs. So, Prop. U was placed before voters. It authorized development of an Alpine high school site and construction of buildings. However, the buildings did not need to be constructed until the enrollment threshold was met and that enrollment threshold had to still be in existence when the request for bids was published.

Pressman’s decision was based on evidence that indicated the enrollment threshold was met from 2008 to 2011 but that enrollment fell after that and was forecast to continue to do so. A request for construction bids could not have been issued until site development plans were approved by the state Architect and that had not happened during the time the threshold was met, according to the judge’s decision. The state Architect approved site plans in 2013, after enrollment had fallen below the enrollment trigger, Judge Pressman stated. Building plans would also have needed approval. While GUHSD submitted building plans in 2012, enrollment by then had declined, according to trial evidence.

According to CDE spokesman Robert Oakes, contacted by East County Magazine, GUHSD reported a districtwide enrollment in 2012/2013 of 22,965. To date, the GUHSD has spent $3,215,381.18 with $234,900 remaining as current authority for that defense, according to Catherine Martin at the GUHSD. The money for defending the district in the lawsuit has been paid out of bond funds.The AUSD has spent $758, 784.31, according to the district.

The court also found that GUHSD’s “promise” to build an Alpine high school was one of many projects “authorized” but not mandated. Judge Pressman found “undisputed evidence” that by 2011 GUHSD was laying off teachers, increasing class sizes and “engaging deficit spending against declining reserves.” He noted that district-wide assessed property values had declined, meaning the district could not raise funds for the school as quickly as planned. Judge Pressman found no evidence of ill intent by GUHSD regarding building the school, as posited by AUSD, in light of a board member’s failed attempt to have the school named after President Ronald Reagan. The decision also rejected AUSD’s request for bond funds to be set aside for the school in an escrow account.

In the latest appeals briefs on behalf of AUSD and the taxpayer group ATBA, attorneys state that the enrollment threshold was indeed met. Furthermore, attorney Craig Sherman, in his appeal on behalf of ATBA states that Prop. U language was “explicit and binding” and that “Grossmont exercised poor funds management” and “has taken specific action to prevent and excuse fulfillment of its duty.”

A brief filed on behalf of AUSD states, “Grossmont knew there would be increased operational costs to the district to support a new school and that there was a substantially declining economy.” It also declares that the trial court ruled “inconsistently” based on “improper extrinsic evidence” and that it “ignored proper extrinsic evidence.” Attorney Jon Williams claims that Grossmont “misled” Alpine taxpayers by initially budgeting the school for 2017, then budgeting it for 2032.

GUHSD has until June 13 to respond, according to its attorney, Khai LeQuang, who spoke to East County Magazine. LeQuang said because of the 2008 financial crisis, property values changed and that stretched the time needed to raise the funds from about six years to more like 25 years.

“Even if the district had the money, they probably wouldn’t build the school right now,” LeQuang said. He estimated that approximately $23 million has been spent toward the school and roughly $42 million is left in the budget in a line item, so if the enrollment threshold is met, GUHSD could be held responsible to build the school with those remaining funds.

“There’s so much complexity in this case,” LeQuang said. “That’s why you have to give the district some discretion. The world could be completely different in 2032.”

AUSD is also currently pursuing unification so that it can potentially build its own high school. To read more about that, see the companion article to this story in East County Magazine.

GUHSD has until June 13 to respond.

Someone is getting rich here...and it's not the Kids. And its seems the lack of Kids is a problem as well currently. Maybe some contractors are pushing for this with one focus Money. As an Alpine homeowner I would much rather see investments in the current system setup as it is now. Than please some LAZY parents and I'm sure some SNOWFLAKES that don't like to get up a little sooner to go to school and get home later.

The commute problem isn't convenience - it's about saving lives, and some students have lost theirs driving such long distances especially with winter weather.

Our kids used to go to the GUHSD district, and I would gladly have delayed some upgrades to existinig schools in order to protect the kids from Alpine. No other district students have to travel such long distances.  Why should Alpine not deserve the same as all the other kids?  Their parents helped push through two bond measures, believing a school would be built with the money not once, but twice. They got nothing to show for their money or efforts.