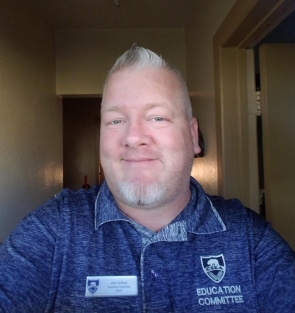 By Robin N. Kendall
Photo: John Paul Sullivan, the only candidate who responded to our questionnaire.
October 6, 2020 (Alpine) -- Alpine residents may vote for two candidates for school board this year from a slate of three. Two of the candidates are running for reelection and there is one newcomer to learn more about. The trustees serve a four-year term. Unlike other school boards in the region, there are no women on the board or on the ballot this year.
The district’s website says they serve approximately 1,750 students in grades K-8 and offer a range of programs, including dual Spanish immersion, homeschool, hybrid learning, robotics, Leader In Me, and more. This semi-rural school district in San Diego’s East County has two elementary schools, an early learning center, a learning academy and a middle school.
Travis Lyon is the current President of the Alpine Union School District and has been a member since 2016. Joseph Paul Perricone is also a current board member serving since 2012. Both are running for reelection. Neither of these incumbents have yet responded to ECM’s email requesting more information about their campaign.
The newcomer on the ballot is John Paul Sullivan, a Navy veteran, VFW leader and father of three teenagers. He responded with the following information.
John Paul Sullivan, challenger for Alpine School Board Trustee
Biography:  John Sullivan has lived in Alpine for nearly four years and previously lived in El Cajon. He works as a school employee for the La Mesa Spring Valley School District as a Senior Day Elementary School Custodian. He says he, “loves every moment of it, being able to mentor and help guide our future.”
Sullivan was raised in Stockton, California, and joined the Navy in 2000. During his service he was a Quartermaster First Class navigating ships and deployed eight times. He served on USS Fitzgerald, USS Tarawa, USS Gladiator, USS Ardent, USS Devastator, USS Chief, and USS Dextrous. During his last six years he was on minesweepers in the Middle East. He was honorably discharged in 2014.
Now, Sullivan volunteers as is the Senior Vice Commander at the Veterans of Foreign Wars in Alpine (VFW) POST 9578.
Sullivan’s answers to ECM questions:
1.  What are the most significant current challenges facing education in this community? How can the school board address these challenges?
We are in a tough time for many families at the moment, with many out of work. And the unknown as far as education goes, whether it be in person or online or a mixture of both. The one thing I do know is everyone wants nothing less than to have our kids back in person in the classrooms but we want this to happen safely. There are many factors that go into a decision like this. The health and well-being of our students as well as staff are at the forefront and I believe we need to have a full plan to ensure that parents can be at ease sending children to school.
2.  What motivates you to want to serve on the school board?  Were there experiences in your education or career that sparked you to do this?
What motivates me is the fact that I work as an elementary school day custodian and have a deep desire for an education system that truly puts children first. It’s up to the school board to hold that standard and remind people that we all have to put our differences aside and remember that at the end of the day the decisions that are made at a board meeting will impact our children in some way. And if it happens to be a negative impact, then we are failing.
I served in the Navy for roughly 14 years and in that time did eight deployments. I understand what quick thinking and problem-solving entails. I was raised in foster homes, off and on growing up, so I understand that not every child is the same and that each situation has to be approached differently, but I feel my life’s experiences put me in a situation where I would be a great asset to the school board.
3.  For incumbents, what accomplishments on the board are you most proud of?  For challengers, what do you most hope to change?
Communication. I would love to change the way that the communication between the board members and staff is perceived. After speaking with both teachers and classified personnel there is one common echo, and that is the feeling of not being heard. The one thing I know is a quick way to divide (people) is the feeling of being ignored or not heard. Staff members should feel welcomed to talk to a board member at any given time and as a board we are there for students, parents, staff and community. There should always be an open-door policy when it comes to elected officials.
4.  Who has endorsed your candidacy?
Both Alpine’s classified school support staff employees (CSEA) and Alpine Teachers (ATA) have endorsed and support me. I am also supported by the Alpine VFW.
5.  What is your vision for education in this community, and how can the district better address racial inequalities?
I believe Dr. Newman (superintendent) has a great thing going for him up here in Alpine. I would just love to help drive it even further as our community and its children deserve quality and unbiased education. I would love to see diversity training mandatory for staff annually just as we already do sexual harassment and mandated reporter training annually. Diversity should be up there too. My vision for Alpine is to make it the district of choice for East County and I would love for Alpine to be the district that other districts strive to be like.