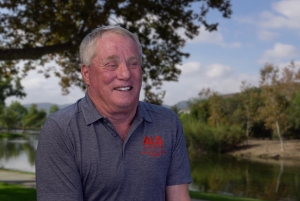 Because of Greenberg’s donation, every dollar donated to the ALS Association Greater San Diego Chapter until Dec. 31, 2020 will be matched dollar-for-dollar up to $25,000, according to Steve Becvar, ALS Association executive director.

“2020 has been a challenging year, but ALS doesn’t stop and neither have we in helping people live longer and better with this horrible disease,” said Becvar. “Because of the generous matching donation from Rick Greenberg, our chapter will finish the year strong. He’s an amazing and inspirational example of a courageous and supportive family member.”

Greenberg said his donation is in honor of his identical twin brother David, who was diagnosed with ALS in 2014 and passed away Dec. 7, 2016. He was 69. David had a 30-year career as a general-practice family physician.

“I’m willing to do whatever I can in David’s name to continue the great work of the ALS Association and to eliminate this devastating disease,” said Greenberg, 73. “ALS doesn’t just affect the patients who have the disease, but it also equally impacts all the family members.”

ALS, or amyotrophic lateral sclerosis, often called Lou Gehrig’s disease, is a progressive neurodegenerative disease that affects neurons, or nerve cells, in the brain and the spinal cord. The progressive degeneration of the motor neurons in people living with ALS weakens muscles and impacts physical function. Eventually, people with ALS lose the ability to initiate and control muscle movement, which usually leads to total paralysis. There is no cure, cause or life-prolonging treatments for ALS and life expectancy for a person with ALS is within two to five years of diagnosis of initial symptoms.

“It was painful and excruciating to watch my identical twin progressively deteriorate in front of my eyes from a healthy, active athletic individual to someone who was unable to participate in sports, unable to walk and needed a wheelchair or motorized scooter,” said Greenberg, who has been retired since 2014.

Greenberg said about his brother David also was diagnosed with pancreatic cancer after his ALS diagnosis.

“I felt it was unfair that David would be saddled with two terminal illnesses and I, as his twin brother, had nothing except good health,” Greenberg said. “But, David disagreed with me and said he would rather have both diseases knowing that one of us would live longer and extend our family legacy.”

Greenberg said his brother sought the advice of several physician friends in confirming the ALS diagnosis in June 2014, about two years before he passed.

“I’ve never forget the day David called me on the phone and said his symptoms were not orthopedic-related to a previous hip replacement, but, instead, it was ALS,” said Greenberg. “I was extremely distressed. As time went on and David’s condition continued to decline, I always felt I wasn’t doing enough to contribute to his health. That’s the major reason I chose to be a major partner with this matching donation challenge.

“I’ve been so impressed by the efforts of the local San Diego chapter staff in their ongoing assistance of local ALS families. They make such a major contribution to the patients they care for with so little resources. I want to encourage everyone to join me, raise the funds necessary to continue the great work of this organization and double the impact with a year-end donation.”

“We’re very grateful for the $25,000 pledge and we’re asking generous San Diegans to rise to the occasion and double their dollars to help us achieve our goal,” said Becvar. “We’re counting on everyone with this urgent request to give their best gift today, honor the courageous souls affected by ALS, remember those who have passed and raise awareness in support of a good cause. These year-end, tax-deductible gifts will help us provide care services, resources and programs for people with ALS and help create a world without ALS.”

All services for patients and families are provided by the ALS Chapter at no cost, Becvar said. Also, Becvar said medical expenses associated with ALS, including medical equipment, programs and services, can cost up to $250,000 annually, depleting families’ life savings. Currently, ALS officials said more than 200 San Diego and Imperial county residents are registered with the local ALS chapter.

The ALS Association is the only national not-for-profit voluntary health organization dedicated solely to fighting against ALS on every front through research, public policy and care services. It is the largest private funder of ALS research in the world. The Association funds global research collaborations, provides assistance for people with ALS and their families through its nationwide network of chapters and certified clinical care centers, and advocates for better public policies for people with ALS. The mission of the ALS Association is to find a cure for and improve the lives of people living with ALS. By leading the way in global research, providing assistance for people with ALS through a nationwide network of chapters, coordinating multidisciplinary care through certified clinical care centers, and fostering government partnerships, the ALS Association builds hope and enhances quality of life while urgently searching for new treatments and a cure.

The Greater San Diego Chapter, chartered in February 2013, is one of 39 chapters nationwide. The San Diego chapter works closely with the ALS San Diego Clinic at the University of California San Diego, which has been certified as a Center of Excellence by the national ALS organization. At its San Diego offices, the local chapter also showcases an ALS bedroom and bathroom that is equipped with features and benefits that would be helpful to people with ALS. For more information about the ALS Association Greater San Diego Chapter, visit www.alsasd.org.