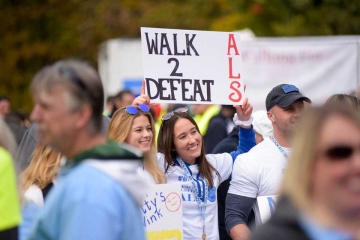 October 11, 2021 (San Diego) -- The ALS Association Greater San Diego Chapter will present its 2021 Walk to Defeat ALS, the nonprofit’s 21st annual fundraising walk, on Sunday, Oct. 17 as a virtual fundraiser. The fundraiser is free and open to the public. Registration is now open. Information is available at www.ALSwalkSD.com.

For the second time in as many years, the Walk to Defeat ALS will be held as a virtual event. The theme for the 2021 Walk to Defeat ALS 2021 is “Walk Your Way,” which refers to the many different ways supporters can participate walk virtually or in their own neighborhoods while still raising money for a cure, according to Steve Becvar, executive director, ALS Association Greater San Diego Chapter.

“Since last year’s walk, we have worked tirelessly to bring our ALS community together and return to an in-person event in a single location,” Becvar said. For nearly two decades, the event was held at Mission Bay’s De Anza Cove area, a public waterfront city park.

“However, the pandemic and the surge of the delta variant presented unexpected and insurmountable challenges and it became apparent we would not be able to deliver the kind of experience our ALS community has come to expect or that meets the high standards we set for ourselves,” said Becvar.

“Multiple factors went into this decision to repeat this year’s walk as a virtual fundraiser, including a commitment to put first the health and safety concerns and the well-being of our supporters as a top priority,” Becvar continued. “We decided not to move forward with an event that delivers anything less than the excellence our ALS community has come to expect and deserves from our chapter.”

“We’re encouraging our 2,000 regular attendees to choose their own way to walk, whether it’s a stroll in their neighborhoods, at a park or beach or mountain hike, or even on a treadmill,” said Becvar. “Again this year, choose when and where you want to walk on event day, anywhere you will be safe and comfortable with friends, families, colleagues or neighbors. Without geographical or time restrictions, the potential is there to involve more people than ever before.”

Becvar said some supporters are planning creative ways to participate in the 2021 Walk to Defeat ALS, including planning a scavenger hunt for their fellow walkers, drawing messages on neighborhood sidewalks with colored chalk, decorating a car with balloons and streamers and driving around town and posting their walk photos and videos of activities on social media channels using the hashtag #SanDiegoWalktoDefeatALS.

“We’re excited to hear about hundreds of mini-walks that will happen simultaneously on Oct. 17 throughout San Diego County,” Becvar said. “We are committed to do our best because we want a cure and support the individuals, families and caregivers affected by ALS.”

Medical expenses associated with ALS, including medical equipment, programs and services, can cost up to $250,000 annually, depleting families’ life savings. All services for patients and families are provided by the ALS Chapter at no charge. In addition, the Chapter currently maintains 2,500 square feet of storage space to house ALS equipment that includes scooters, power wheelchairs and other durable medical equipment provided to ALS patients and families at no charge. Currently, ALS officials said approximately 200 San Diego and Imperial county residents are registered with the local ALS chapter.

The ALS Association is the only national not-for-profit voluntary health organization dedicated solely to fighting against ALS on every front through research, public policy and care services. The mission of the ALS Association is to find a cure for and improve the lives of people living with ALS. By leading the way in global research, providing assistance for people with ALS through a nationwide network of chapters, coordinating multidisciplinary care through certified clinical care centers, and fostering government partnerships, the ALS Association builds hope and enhances quality of life while aggressively searching for new treatments and a cure.