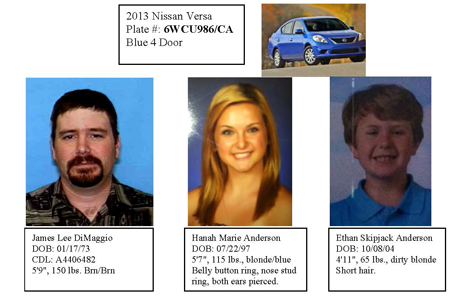 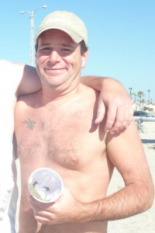 A vigil is planned Tuesday at 7 p.m. at El Capitan High School in Lakeside

August 5, 2013 (San Diego’s East County ) -- After the body of Lakeside resident Christina Anderson,44, and an unidentified child were found in a burned home in Boulevard last night, an amber alert has been issued for Anderson’s two children.

Hannah Anderson, 16, and Ethan Anderson, 8, are believed to have been abducted by James Lee DiMaggio, 40, who is driving a blue Nissan Versa with CA license plate 6WCU986. He may be heading to Texas or Canada, authorities have indicated.

“It has been determined that Ms. Anderson had been murdered,” Lieutenant Glenn Giannantonio with the San Diego Sheriff’s Homicide Detail said.  Anderson reportedly had a close but platonic (not romantic) relationship with DiMaggio.  A child, not yet identified, and a dog were also found dead. Note: DiMaggio's driver's license shows a beard and mustache, however most recently he was cleanshaven.

Hannah Marie Anderson has blonde hair and blue eyes; she weighs 115 pounds and has a nose stud, belly button ring and pierced ears. Ethan has sandy blonde hair, stands 4 feet 11 inches tall and weighs 65 pounds. The children were last seen Saturday in Boulevard and their grandparents reported them missing on Sunday.

On Sunday night, a home at 2071 Ross Avenue was reported fully engulfed in flames and after dousing the blaze, authorities found the bodies of Christina Anderson and an unidentified child inside; the dog was located elsewhere on the property.

Hannah was a student at El Capitan High School in Lakeside, where a vigil is planned tonight at 7 p.m.

Sheriff’s Homicide Detail, Bomb/Arson and Crime Lab are investigating and have sought help from the Federal Bureau of Invsetigation.