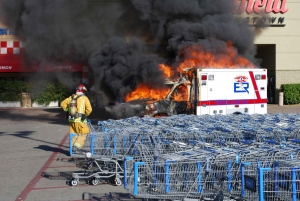 September 29, 2011 (El Cajon)—An ambulance burst into flames after oxygen tanks on board exploded late this afternoon at Westfield Parkway Plaza mall in El Cajon, according to Monica Zech, spokesperson for the city of El Cajon.

Shortly after 4:00 p.m. Heartland Fire & Rescue in El Cajon responded to reports of the vehicle fire near Wal-Mart and found the ambulance fully engulfed in flames.

The fire was quickly extinguished in about ten minutes. The ambulance, belonging to ER Ambulance service, was not occupied.

The west side entrance to the mall was temporarily closed for approximately thirty minutes. El Cajon Police handled crowd control. Witnesses reported hearing explosions during the fire, which were later determined to be caused by oxygen tanks exploding. The fire is now under investigation. There were no injuries reported.