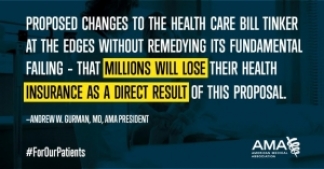 May 3, 2017 (Washington D.C.) – House Republican leadership is pushing for a rushed vote on a revised proposal to repeal the Affordable Care Act, or Obamacare and replace it – without bothering to wait for a nonpartisan Congressional Budget Office (CBO) analysis. But the American Medical Association (AMA), the nation’s largest doctors’ organization, has sent a Tweet warning patients to contact their representatives and urge a no vote.

“Proposed changes to the health care bill tinker at the edges without remedying its fundamental failing – that millions will lose their health insurance as a direct result of this proposal,” Dr. Andrew Gurman, AMA president, warns.

The CBO analysis, due out in two weeks, will assess costs and impacts of new amendments, including one that will make it harder and costlier for people with pre-existing conditions in some states.

The last time the GOP tried to pass a repeal measure, the CBO warned that 24 million Americans would lose healthcare coverage.  This time, members will be voting without knowing how many will be dropped from coverage under their revised plan.

House minority leader Nancy Pelosi (D-California) blasted the hasty action.  “Forcing a vote without a CBO score shows that Republicans are terrified of the public learning the full consequences of their plan to push Americans with pre-existing conditions into the cold,” she said.

Rep. Fred Upton (R-Mich.) added an amendment allowing $8 billion over five years to help people with pre-existing conditions in states that opt to repeal Obamacare protections that prevented insurers from denying coverage to sick people or those with preexisting conditions.  “Is it enough money?  I don’t know,” he admitted, The Hill reports.

Washington Post reports that multiple organizations that have looked at the bill indicate people will preexisting conditions will be paying a lot more under the GOP plan than under Obamacare, at least in some states.  The Kaiser Foundation has indicated that a high-risk pool created by the ACA that covered a mere 100,000 people cost $2 billion over just one year, so it’s not credible to believe that a larger pool to cover more people over five years could possibly be done for the $8 billion proposed.

“For subsidies to cover 68 percent of enrollees’ premium costs, as ACA tax credits do now in the individual market ex­changes, the government would have to put up $32.7 billion annually,” Emily Gee, a health economist at the progressive Center for American Progress, wrote in an analysis of the plan, the Washington Post reports. “Even after applying that subsidy, high-cost consumers would still owe $10,000 annually toward premiums.”

Congressman Darrell Issa (R-San Diego) told reporters in the Capitol who asked how he plans to vote on the bill, “None of your business.”  Asked if his constituents deserve to know how he will vote by a reporter from The Hill, Issa fired back, “You’re not a constituent,” then turned away and entered an elevator.

The bill also still has many other items that drew strong objections the first time the GOP tried to introduce it, when it was withdrawn for not enough support even from moderate Republicans.

But House Speaker Kevin McCarthy says he has enough votes in the House for passage, with help from conservatives in the Freedom Caucus, the Washington Post reports.

If the House passes the bill, it will advance to the Senate, where amendments could be made and a reconciliation measure sent back to the House.