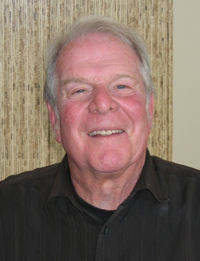 April 27, 2012 (San Diego) -- San Diegans Richard Lederer and Caroline McCullagh are the proud parents of a bouncing baby book, American Trivia: What We All Should Know About U.S. History, Culture & Geography (Gibbs Smith Publisher, 2012). Over a span of a year, the co-authors will share with you their journey through American history. You can order inscribed and signed copies of the book by writing to richard.lederer@pobox.com.

Christopher Columbus (1451-1506) is generally given credit for finding America. In grade school most of us learned this ditty:

In fourteen hundred ninety two, Columbus sailed the ocean blue.
And he did. On his first voyage, he sighted the Bahamas and made land on Hispaniola (now Haiti and the Dominican Republic). On three subsequent voyages, he also explored the coast of South America. But Columbus never realized that he had sailed to the New World. He died in 1506, blissfully certain that he had reached Asia.
An Italian, Amerigo Vespucci (1454-1512), working in Spain for the Medici family, helped outfit the ships for Columbus’s first voyage. He in turn made three voyages to the New World, but never to North America. When he returned to Spain, he wrote about the wonders he had seen.
His account was widely read, even in the Duchy of Lorraine, where Dutch cartographer Martin Waldseemüller (1470?-1520) was drawing a new map of the world. Waldseemüller decided to write the name America across the face of the new continent on his world map.
He wished to honor Vespucci because,apparently not having read Columbus's best-selling report of his voyage,he believed Vespucci to be the first man to have set foot in the New World: “And Amerigo Vespucci has found another, fourth part, for which I see no reason why anyone could properly disapprove of a name derived from that of Amerigo, the discoverer, a man of sagacious genius.”
Waldseemüller published a thousand copies of his map in 1507. As far as we know, only one survives, now housed in the Library of Congress.
By the way, Amerigo is the Italian form of the Medieval Latin name Emericus which was, in turn, derived from the German Heimirich—Henry in English. This may mean that we all actually live in the United States of Henrietta. Could have been worse: Our nation could have been dubbed Vespuccia!