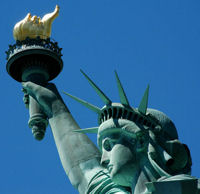 June 15, 2012  (San Diego) --San Diegans Richard Lederer and Caroline McCullagh are the proud parents of a bouncing baby book, American Trivia: What We All Should Know About U.S. History, Culture & Geography (Gibbs Smith Publisher, 2012). Over a span of a year, the co-authors will share with you their journey through American history. You can order inscribed and signed copies of the book by writing to richard.lederer@pobox.com.
Lady Liberty
The Statue of Liberty Enlightening the World was a gift of friendship from the people of France to the people of the United States commemorating the alliance between the two nations during the Revolutionary War. The statue arrived in the United States aboard the French freighter Isere as 350 individual pieces packed in 214 crates. Lady Liberty was dedicated on October 28, 1886, designated as a National Monument in 1924, and restored for her centennial on July 4, 1986.
The Statue of Liberty is a universal symbol of freedom and democracy. A bronze plaque inside the base of Liberty displays the Emma Lazarus poem "The New Colossus," written in 1883, with its eternally luminous line: "Give me your tired, your poor, your huddled masses yearning to breathe free":
Not like the brazen giant of Greek fame,
With conquering limbs astride from land to land;
Here at our sea-washed, sunset gates shall stand
A mighty woman with a torch, whose flame
Is the imprisoned lightning, and her name
Mother of Exiles. From her beacon-hand
Glows world-wide welcome; her mild eyes command
The air-bridged harbor that twin cities frame.
"Keep, ancient lands, your storied pomp!" cries she
With silent lips. "Give me your tired, your poor,
Your huddled masses yearning to breathe free,
The wretched refuse of your teeming shore.
Send these, the homeless, tempest-tost to me.
I lift my lamp beside the golden door!"

Sculptor Frederic Auguste Bartholdi had modeled Liberty's face on his mother's. The copper skin is 3/32 inch thick and is supported by an iron framework designed by Alexandre Gustave Eiffel, the engineer who later designed the Eiffel Tower. In 1876, Liberty's original torch was the first part constructed. In 1984, it was replaced by a new copper torch covered in twenty-four karat gold leaf, which is lit by floodlights. With a height of more than 151 feet and a waist 35 feet thick, she may be the most massive woman in America. With her pedestal, the entire Statue of Liberty reaches 305 feet, which made her the tallest structure in the United States when she arrived.