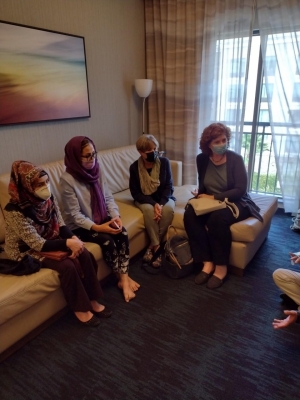 February 26, 2022 (La Mesa) - Afghan and American cultures are different in many ways, for example, in lifestyle and style of communication. It is always a learning experience when two cultures meet, but learning is good as it can broaden your life.

The above has been true for Mary Danaher [formerly Sikes] and Cheri Cooper Robertson and Tracey Edwards of the group, Helping El Cajon Refugees, as well as Laurie Spiegler and Jennifer Einbinder of Welcome Home. These women have all been working with and helping the incoming Afghan refugees who fled when the Taliban took over Afghanistan last August.

Mary Danaher is the woman who has been helping Sayed Ahmad Sadat, the Afghan journalist I wrote about who helped women in his country and spoke out against the Taliban. Mary met Sayed eight years ago when he was exploring film festivals and grants online as he was working on a documentary about children in Afghanistan. Mary was the president and CEO of the Coronado Film Festival as well as the co-founder. Sayed wrote to Mary and they started a conversation which included religion, literature, film, family, and the history of his country. Mary taught him how to write grant proposals and how to network to find mentors like Women Moving Millions. A true friendship emerged as they got to know each other and their families better. Mary recalls a WhatsApp call with him and his sister late at night when their neighborhood was under fire from the Taliban. She wanted them to hang up and hide, but he asked her to stay on the line and she realized that their conversation was a lifeline out of the madness and danger. Sayed fled from Afghanistan in August and during his long journey, he constantly texted Mary to let her know he was okay. She felt great relief when he finally arrived at Dulles airport. He arrived in San Diego in December and has been living at Mary’s home in a casita in the back. She views him as her Afghan grandson and has been teaching him about life in America, like washing dishes, doing laundry, and being responsible. 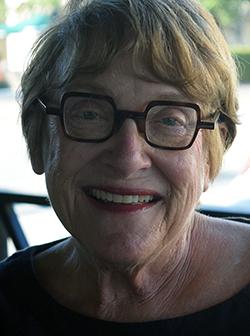 Mary herself is the grandchild of Irish immigrants who arrived in this country with nothing. They were poor, uneducated, and struggled. They lost two daughters to whooping cough and the flu epidemic. Their two surviving sons went on to receive PhD’s and have successful lives. Mary feels that her grandparents inspired them all.  She got an MBA and attended Harvard Law School. She was a mathematician who loved business and had a long career doing what she loved. Her career included being CEO of several companies and President of three Fortune 500 Corporate Divisions. She was living her grandparents’ dream and never forgot that. She feels that helping Sayed and other refugees is a way of honoring her grandparents.

Cheri Cooper Robertson and Tracey Good Edwards volunteer with Helping El Cajon Refugees, a group on Facebook. This large group works with resettlement agencies like Jewish Family Service and IRC. HECR also partners with Second Families and together they help to ease the transition of the incoming refugees. They provide furniture for apartments, clothing, shoes, toiletries, filled backpacks for the children, and food. They make the refugees feel welcome. They try to be culturally sensitive to their needs. HECR is well-organized and have “leads” for different areas. For example, Tracey is the food lead and Cheri is the blanket lead.

Tracey got involved with the group about three years ago through her book club who wanted to find some way to help in their community. They sponsored a refugee family with ten children, and Tracey was impacted by the items on their wish list, basic things she took for granted. She decided to get more involved and soon became the food lead, a responsibility she now shares with another woman as the influx of refugees grew. She has learned to fine tune the grocery list and purchase food at local Middle Eastern stores as well as “big box” stores. Her kindness and warmth have also been much appreciated by the families and other volunteers. The grocery team is often the first one to meet the families. Tracey has an M.S. in Speech-Language Pathology. 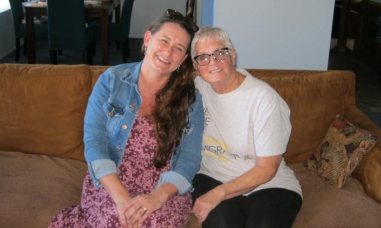 Cheri got involved with HECR in December 2020. At the time, her 94-year-old father was living with her and she felt that collecting and storing needed supplies was something she could do at home and still be useful to others.  After her father passed away last October, HECR asked if she would become the blanket lead. Cheri wants to follow her parents’ example as they always helped those in need.  She has also learned that “better than nothing” is not good enough. HECR makes a point of only accepting new or like new items. They also make sure everything is clean. Before she retired, Cheri worked as an office manager for a CPA. Cheri says that the smiles and thank you[s] she has received from the grateful families make it all worthwhile. 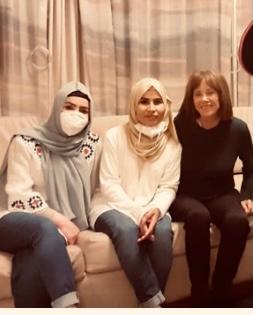 Laurie Spiegler is the co-founder and co-chair of the group, Welcome Home. This group is a volunteer service and funding organization. They want to assist refugees by using micro-grants with help from the Jewish Foundation, to invest in their education and job training for successful future careers. In addition, they help the refugees who had careers in their countries transition to jobs here in the United States; for example, a pharmacist might train to be a pharmacy technician. Welcome Home also works with other non-profits and in conjunction with Kind Hearts, they helped to gather and fill backpacks for the Afghan children living at various extended stay type hotels, so they would feel welcome, and be ready to start school in America. They also coordinated with the school district to have buses come and pick them up. Laurie had an interesting work career, working as a teacher, a marriage and family therapist, and in advertising.

Finally, you could say that Jennifer Einbinder is the heart and soul of Welcome Home. She is in charge of picking up, sorting, and storing the donations that come in. Thus, if one of the families has a need for clothes, shampoo, or an Instapot, Jennifer can provide that. She also likes interacting on a personal level. Jennifer was a doula for 12 years and trained at UCSD. When asked to meet an Afghan doula to exchange experiences and provide encouragement, she brought the head of the UCSD doula program, Ann Fulcher, with her much to the delight of the Afghan doula.

Einbinder and all the women above have shown great compassion and heart in showing the refugees how welcoming Americans and the United States, a land of immigrants, can be. Truly, two different cultures coming together.