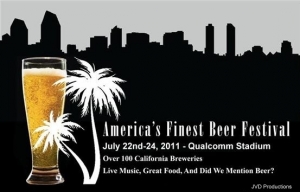 July 18, 2011 (San Diego) – America’s Finest Beer Festival is expected to be one of the largest craft brewery festivals in Southern California. With beer from more than 120 craft breweries on tap and 21 bands participating, this fun-filled event will benefit the San Diego USO and the Rancho San Diego − Jamul Chamber of Commerce.

“We want to continue to recognize small businesses which is the spirit and backbone of America, recognition the emerging beer crafters industry is important to our economy locally and statewide , the industry (breweries) help to strengthen local economies as well as economies throughout California”, stated Valerie Harrison, President of the Rancho San Diego-Jamul Chamber of Commerce.

The three-day event will take place Friday, July 22 through Sunday, July 24, 2011 and features 21 bands ‘Live on the Lawn’ at the Qualcomm Stadium in San Diego. General admission tickets are $49 which includes 12 beer tickets to be used at any of the 122 breweries on tap. Extra beer tickets may be purchased for only $2.00 each. These are full 4oz premium beers.

Tickets are available through Ticketweb (www.ticketweb.com). Also, a limited number of VIP passes are available each day which include unlimited beer and food, preferred stage viewing, and executive restroom facilities which can be purchased on the Rancho San Diego – Jamul Chamber of Commerce website (www.rsdjchamber.com). A special non-alcoholic pass is also on sale through Ticketweb.com for only $35 that includes an all day pass to the festival.

Going to Comic-Con? Use your Comic-Con badge at the gate for a $10 discount.

See the website for all the featured brews on tap. www.americasfinestbeerfestival.com

The festival features 21 bands and over 122 beers on tap and 21 bands (see list at bottom of this article).

According to beer specialist Melani Gordon, owner and co-founder of TapHunter.com, “San Diego is really the cornerstone of brewing innovation and a trendsetter for craft beer culture, but it goes beyond that. If you spend enough time on a barstool you’ll realize that craft beer is woven into the fabric of the local community.”

With beers from more than 120 different craft breweries from California and across the United States, attendees will not be disappointed with their sampling opportunities. Combine that with live music from 21 top bands, and people from all walks of life coming together. No wonder it is noted as “San Diego’s best summer value!”

About America’s Finest Beer Festival: The festival will be held from July 22 – 24, 2011 on Qualcomm Stadium’s practice field in San Diego. General admission tickets are on sale for $49 which includes one day of general admission, PLUS 12 beer tickets and live music all day long.

There are limited VIP passes ($175 each) for each day of the event which must be purchased in advance through the Rancho San Diego–Jamul Chamber of Commerce (www.rsdjchamber.com). VIP passes include unlimited food buffet and beer in a private VIP garden. Three-day passes are also available. This is a 21 and over event. Tickets may be purchased at the door.

A portion of each ticket sold will benefit the USO San Diego. The USO is an important part of San Diego’s military culture, offering a number of services to provide a touch of home to military personnel and their families. This is a service that’s in great need, so what better way to help – combine a good time with a good cause.

Attendees can access the event via trolley, buses and taxis. Parking is available at the event for $15, but be aware that the parking is anticipated to be congested due to the overflow parking for ComicCon. For additional trolley and parking information, go to www.afbfest.com/getthere. To learn more, visit www.AmericasFinestBeerFestival.com.