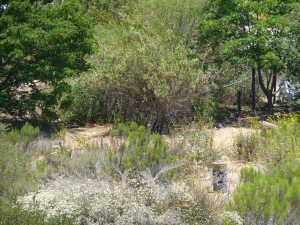 At Lakeside River Park Conservancy, the team focuses on removing non-native and invasive plant species and planting more native species in and around the San Diego River in hopes of restoring the natural wildlife habitat.  Trail maintenance, beautification, and education are also key components in reaching that goal.

Fire prevention is the other major role the team is taking on while in Lakeside.  Blue Sky Ranch emerged because of the Cedar Fire in October 2003, which burned nearly 275,000 acres of land. The Ranch’s mission is to promote regenerative design allowing the surrounding ecosystem to revitalize itself and engage the community to assist as a participant in these recovery efforts. It is the intention that the solutions for healing incorporated at Blue Sky Ranch benefit the inhabitants of both the natural and built environment. The 757-acre Silverwood Wildlife Sanctuary, located near Lakeside, is owned and maintained by San Diego Audubon.

The NCCC team is undertaking extensive fuel reduction in and around Blue Sky Ranch and Silverwood Wildlife Sanctuary with the hope of creating a buffer zone between the east San Diego wilderness and the residing communities. The act of fuel reduction includes the removal of flammable vegetation, such as dead leaves, dead trees, and other plant life that are considered fire hazards. Then the vegetation is piled up in one location and burned in a controlled environment.  Other tasks being performed by the team include construction projects and necessary facility maintenance.

“It is our hope to leave knowing that the El Cajon Valley community is safer and more prepared in case of a wildfire,” said Wendy Thomas, the leader of the NCCC team.

While there are varying definitions for East County, I've never seen one that didn't include Lakeside. Lakeside attractions are listed on the San Diego Convention and Visitors' Bureau's East County webpage. The UT lists Lakeside news under its East County section. The East County Brush Fire Partyline on Facebook is based in Lakeside. The Lakeside Rodeo's homepage references its location ion East County. Wikipedia's map of San Diego's East County includes Lakeside. Historical references to Lakeside in East County date back to the early history of our region. There are many references to Lakeside in East County in reports on the 2007 and 2003 firestorms that burned much of Lakeside. I think a distinction should be drawn between "East County" which includes urban areas such as Santee, La Mesa and El Cajon vs. "backcountry" which is generally viewed as the areas east of El Cajon -- Alpine, Campo, Boulevard, Jacumba etc.
Lakeside is NOT in the East County. This county is over 100 miles long and Lakeside is 20 miles inland. It's not even in central San Diego County! Regards from the "Real East County" Campo.